Why I'm Eating Soylent for Two Meals a Day

by Jonathan Strickland Aug 1, 2016
Jonathan and his lunch, a bottle of Soylent 2.0 Dylan Fagan/HowStuffWorks

On July 30, 2016, I decided it was time for a change. That's when I ordered my first case of Soylent 2.0, the prebottled meal substitute named after the 1973 science fiction film "Soylent Green." In that movie, a character discovers that the food rations most of the world depends upon are made not from plankton, but from human corpses.

I am happy to report that Soylent 2.0 isn't "made from people," but rather from a vegan mixture of all sorts of stuff ranging from soy protein to algal oil (that's literally oil from algae). Each bottle has 400 calories and 20 percent of the daily recommendation for 25 nutrients (think things like calcium, B vitamins and folic acid). The company is careful not to make any medical claims related to the product.

So what are you supposed to do with it? Generally speaking, it's not that different from other meal-substitute drinks. You can grab a Soylent 2.0 in place of a normal meal. It's quick and convenient and, compared to fast food, it contains more nutrients and lower amounts of sodium, sugar and other stuff that's unhealthy in excess.

I tried my first bottle yesterday, Sunday, July 31. Heck, I even broadcast the experience live on Periscope.

Would I love it? Would I find it disgusting? Would I do my own interpretation of the Bellagio fountain show in Las Vegas?

I actually liked it. I was worried about the taste, but surprisingly I found it quite pleasant. Imagine you have a bowl of semisweet cereal. You add almond milk to the bowl. You let it sit for a while. You remove the cereal. Then you drink down the slightly sludgy goodness that's left over. That's what Soylent 2.0 reminds me of. Note: I do not normally waste cereal in this way. I'm not a monster.

The consistency of the liquid is thicker than milk but not grainy or gritty. It's slightly sweet. There's definitely a bit of an aftertaste that's not entirely pleasant, but a mint clears that right up.

So why am I doing this? It didn't start out as a work assignment. In fact, the only reason I'm writing this is that my awesome editor wanted to know more about my experience. So here are three reasons why I've decided to try Soylent 2.0.

First, it makes it really easy to count calories. Each bottle is 400 calories. I can set my daily goal for calories and know that if I swap out two meals for Soylent I'm hitting 800 calories for breakfast and lunch. This will help me better plan my dinners, which I won't be substituting. I'm carrying around extra weight, so I plan on running on a moderate caloric deficit for a bit.

Second, it's a really convenient way to grab a meal. Typically, I'd skip breakfast on work days, which also meant that I would be ravenous for lunch by 11 a.m. A bottle of Soylent 2.0 is easy to grab and even drink on the go. I also save time during my lunch hour. Normally, I'd go downstairs to the market and buy food, bring it back to the office and eat it at my desk. By drinking a bottle of Soylent, I figure I can set aside time at lunch to handle personal business or even just have some quiet downtime in the middle of the day (that means I'll be playing more Pokemon Go).

Third, it's cheaper than what I do now. Buying lunch every day adds up. This is particularly true if your office is part of a trendy mixed-use development like Ponce City Market. A case of Soylent 2.0, which has 12 bottles in it, costs around $35. Even though I'll consume two bottles each day, that still comes out to less than $6 per day. Trust me, you won't find a satisfying lunch at Ponce City Market for six bucks.

I plan on keeping a journal of my experiences while on Soylent. Today is the first full day: I had one bottle before I left home and a second one for lunch. Because I have a tendency to overeat, I'm wondering if I'll still feel hungry after drinking a bottle. I also understand that Soylent can produce some interesting gastrointestinal experiences (hereafter known as "the toots"). So far all is quiet on that front, but I plan to keep track of that as well.

I'll update everyone on how things are going in a couple of weeks. Will I get tired of having the same thing twice a day every day? Will I go bonkers because that feeling of hunger just won't go away? Will I change things up with the occasional "real" breakfast or lunch? Will my coworkers demand I be placed in a toot-proof bubble? Be sure to check back in a couple of weeks for the answers to these questions!

Ridiculous History: 150 Years Ago, Men Killed for the Eggs of These Birds

How Is the Black Lives Matter Movement Organized? 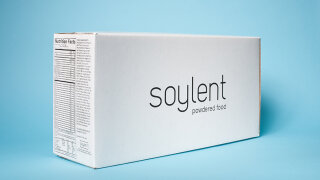 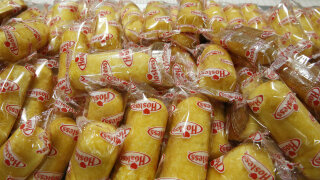 5 Foods That Will Survive the Apocalypse