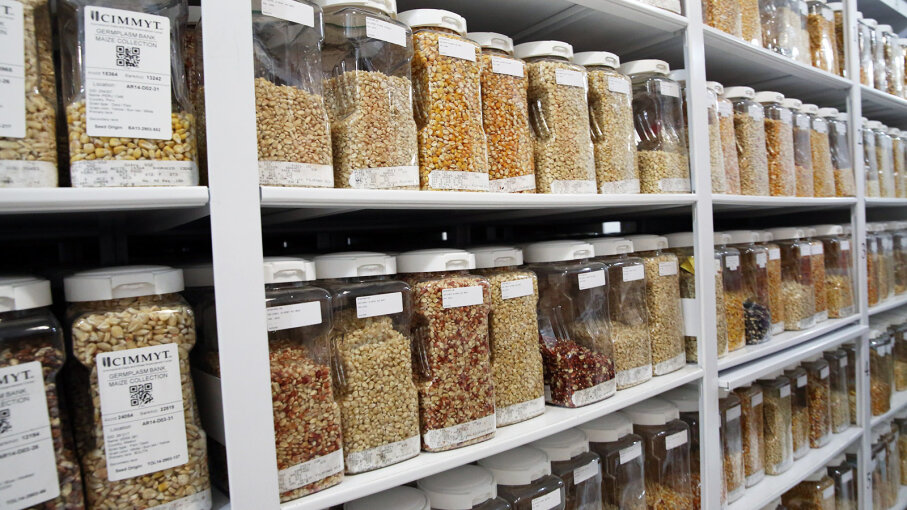 The International Maize and Wheat Improvement Center in Mexico has more than 28,000 unique seed collections of maize and more than 140,000 of wheat. Global Crop Diversity Trust/USED UNDER CREATIVE COMMONS CC BY-NC-SA 2.1

Ever heard of a seed bank? The basic idea is this: When the apocalypse is over and the forests are nothing but smoking ruins and the fields barren of grain, fear not! We can reboot the world thanks to our banked seeds stored in bunkers strategically located from here to eternity. The Svalbard International Seed Vault in Norway, for instance, currently holds more than 880,000 seeds and has the capacity to hold 2.5 billion seeds.

Seeds are amazing that way; all you need to do is dry them out and freeze them solid and they can last for years. It's a comforting thought — an ace up civilization's sleeve in the less-and-less-unlikely scenario that we self-destruct. The U.N.'s Global Strategy for Plant Conservation plans to bank 75 percent of all plant species by 2020.

But hold the comforting thought. According to a study from researchers at the Royal Botanic Gardens, Kew, there's a significant catch. Researchers discovered that a whole whack of plant seeds just can't be banked — including avocado, cacao and mango. Their findings, which were published in the Nov. 2, 2018, issue of the journal Nature Plants, detail how a full 33 percent of tree species alone are on this list, including oak and chestnut trees. Worse still, 36 percent of our "critically endangered" species are also unbankable. That's not even counting 27 percent of the plain old "endangered" plants, or 35 percent of the "vulnerable" ones.

Why can't these seeds be banked? Apparently, not all seeds like the drying out process. And for this, they're labelled "recalcitrant seeds," which seems a little unfair. Calling a seed stubborn just because it can't tolerate dehydration is a bit rich coming from a species that can barely last two days without water.

Luckily, there's a way out of this jam and it involves liquid nitrogen, which is always fun. Yes, to make sure we've got all our seeds safely tucked away in indefinite storage, we have to resort to cryopreservation, just like Ted Williams and the other immortals on ice. All one has to do is dissect the seed, pry out its embryo and plunge it in smoking-cold nitrogen.

Instead of storing seeds at a conventional -20 degrees Celsius (-4 degrees Fahrenheit), going cryo will keep these finickier seeds in suspended animation at a sub-glacial temp of -196 Celsius (-320 degrees Fahrenheit). Some researchers advocate cryopreservation for all seeds, even the cooperative ones, because they'll last longer.

"Ex-situ conservation of plants is more critical than ever, with many threats to plant populations including climate change, habitat conversion and plant pathogens, we need to make sure we're doing all we can to conserve the most important and threatened species," John Dickie, head of Seed & Lab-based Collections at Kew's Millennium Seed Bank and an author of the paper, said in a statement. "As successful as seed banking is for some species, it is not suitable for all seed plants and we need to invest in other ways to safeguard recalcitrant seeds. This paper shows that we need greater international effort to understand and apply alternative techniques like cryopreservation which have the potential to conserve many more species from extinction."

And cryopreservation is just cooler (because of the smoke, see?).

A scientist at the International Potato Center in Lima, Peru, uses liquid nitrogen to preserve seeds.
Global Crop Diversity Trust/USED UNDER CREATIVE COMMONS CC BY-NC-SA 2.0
Now That's Scary
The opening to this article is a little misleading in that the apocalypse itself isn't the only reason for banking seeds, unless one means a slow-motion apocalypse in the form of climate change, habitat-loss and the growing threat of plant pathogens. All these factors are already threatening bio-diversity, so the time to preserve seeds is now. It's also time to protect habitat and reverse climate change. Maybe we should cryopreserve the entire planet until some aliens come along to sort out our problems.