The Future of Frozen Fuel 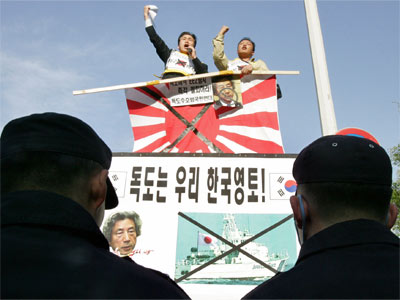 Protesters in South Korea in 2006 demonstrate against Japan's plan to send survey ships into waters claimed by both countries. The disputed waters are a rich fishing ground and were thought to have methane hydrate deposits.
AP Photo/Ahn Young-joon

In 1997, the U.S. Department of Energy (DOE) initiated a research program that would ultimately allow commercial production of methane from gas hydrate deposits by 2015. Three years later, Congress authorized funding through the Methane Hydrate Research and Development Act of 2000. The Interagency Coordination Committee (ICC), a coalition of six government agencies, has been advancing research on several fronts. Much of what we know about the basic science of methane hydrate -- how it forms, where it forms and what role it plays, both in seafloor stabilization and global warming -- has come from the ICC's research.

Interesting ideas about how to extract the methane from hydrates efficiently are also emerging. Some experts propose a technique in which miners pump hot water down a drill hole to melt the hydrate and release the trapped methane. As the methane escapes, it is pumped to the seafloor through a companion drill hole. From there, submarine pipelines carry the natural gas ashore. Unfortunately, such pipelines would need to travel over difficult underwater terrain. One solution is to build a production facility on the seafloor so it is situated near the hydrate deposits. As methane escapes from the heated sediments, workers in the plant would refreeze the gas to form "clean" methane hydrate. Submarines would then tow the frozen fuel in huge storage tanks to shallower waters, where the methane could be extracted and transported safely and efficiently.

That means the frozen fuel from methane hydrate can buy more time as scientists search for alternatives to power our planet. Think of it as an important stepping-stone in our transition to cleaner, greener energy sources.