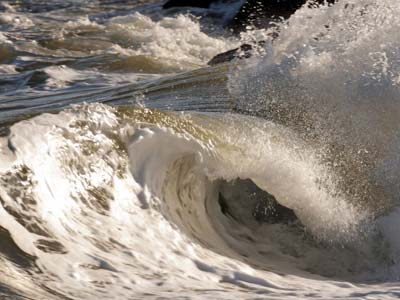 ©iStockphoto.com/ibstickboy
Water crashing along the coast is a clear indication of the ocean's awesome power and the energy potential it holds. See more green science pictures.

Just off Hout Bay, near Cape Town, South Africa, waves can grow to 30 feet (9 meters). Watch these mountains of water crash down on the reef- and rock-lined coast, and you'll have no doubts about the ocean's awesome power. But it doesn't take a visit to a surfing hot spot to appreciate the energy potential of our planet's watery realm. Tides can exchange millions of gallons of water in just a few hours. And currents, like underwater highways, can travel thousands of miles, carrying marine life, debris and nutrients.

Humans have been interested in harnessing the energy of the ocean for centuries. In 1799, a Frenchman teamed up with his son to design a giant lever attached to a ship. As the ship rocked on the sea, it would move the lever up and down, creating a reciprocating motion that could be used to drive pumps, mills and saws located on the shore. The idea sank when the steam engine emerged as the preferred method to perform mechanical work. Nearly a hundred years later, another Frenchman proposed a different technique: Use heat energy stored in Earth's oceans to generate electricity. A few plants were built to test the idea, but they were not cost-competitive with conventional power technologies.

The first real success came in 1966, when a tidal power plant opened in Bretagne, France, on the Rance River. Today, the station produces 240 megawatts of power -- better than a typical wind farm, but less than a coal plant. Only two other tidal plants have had comparable commercial impact. The first is a 20-megawatt station in Nova Scotia, on the Bay of Fundy. The second is a 0.5-megawatt station located in Russia on the White Sea.

Based on such limited success, you might think that ocean power is doomed to languish in the shadow of other energy alternatives. But the tide, if you'll pardon the pun, is turning. Researchers all over the world are experimenting with scores of technologies to convert the energy of waves, tides and currents into electricity. And a few companies believe they can be competitive power generators within the decade.

This article will explain how ocean power works and will examine some of the most promising technologies currently being developed. Let's start with systems designed to capture the mechanical forms of ocean energy.