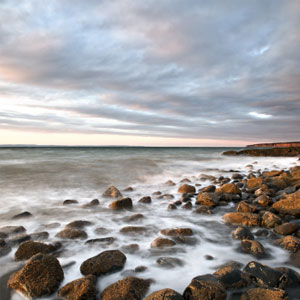 ©iStockphoto.com/shaunl
The Bay of Fundy in Novia Scotia is home to a 20-megawatt tidal station.

Two of the most noticeable features of the ocean are waves and tides. Winds drive waves, which travel for long distances as a series of crests and troughs. Watch any object floating at the ocean surface as it encounters a wave, and you'll notice that it rises up with the crest and falls with the trough. It's possible to convert this oscillating motion into electricity in a number of ways. How Wave Energy Works covers these various systems in great detail.

The gravitational pull of the moon, not wind, is responsible for tides. All coastal areas experience two high and two low tides over a period of about 24 hours, but only about 40 sites are suitable for electricity generation. That's because the difference between high and low tides must be at least 16 feet (4.88 meters) to create enough water flow to make electricity efficiently. The Bay of Fundy is a classic example. This relatively narrow inlet features the highest tides in the world -- 50 feet (15.24 meters) -- and a short tidal cycle. In about six hours, 110 billion tons (100 billion metric tons) of seawater flows in and out of the bay [source: Bay of Fundy Tourism].

One way to harness the kinetic energy of all that moving water involves building a dam, known as a barrage, on a smaller arm of the bay. Sluice gates along the barrage open when the tides produce an adequate difference in the level of the water on opposite sides of the dam. This allows water to flow across turbines that look just like those used in a traditional hydroelectric power plant. The turbines turn a generator, which produces electricity.

Another way to take advantage of ocean tides is to tap into tidal currents, which run close to the shore at water depths of about 65 to 100 feet (20 to 30 meters). To do this, power companies use turbines resembling those seen on terrestrial wind farms, except they are oriented so that the rotors are underwater. The rotors, each about 66 feet (20 meters) in diameter, are also spaced more closely than those on wind farms. As tidal currents surge past the turbines, the rotors spin, turning a generator.

These mechanical-energy systems are just one solution. Up next, we'll see how heat stored in the ocean can produce electricity.