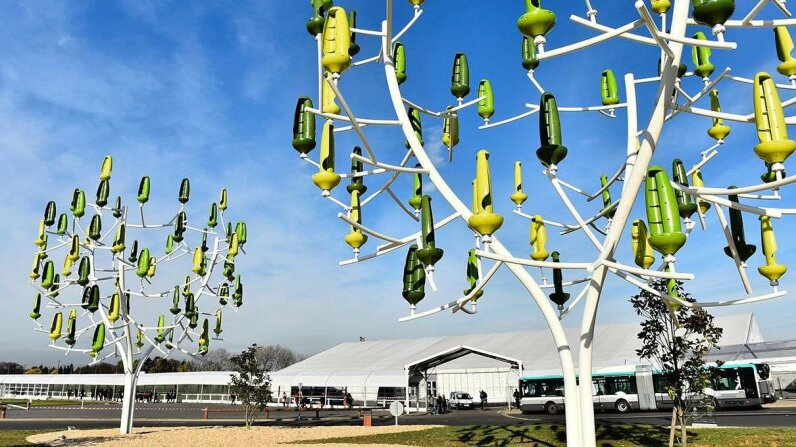 A renewable energy innovation called a "wind tree" contains "leaves" that act as mini wind-turbines to generate electricity. The wind trees in this picture were displayed at the COP21 climate conference in December 2015. Loic Venance/AFP/Getty Images

Even if you're enthusiastic about the need to switch to renewable energy and cut our consumption of climate-altering fossil fuels, it's a little hard to get used to having giant farms of industrial-sized wind turbines. Some critics see the towering devices as too noisy or as an eyesore that mars landscapes and seacoasts. And there are fears that turbines present a lethal hazard to migrating birds who get sucked into their blades.

But that's why an innovative wind energy device created by New Wind, a French company, is pretty cool. New Wind's Arbre à Vent — French for "wind tree" — looks something like a tree, albeit one that stands just 9 feet (2.7 meters) tall and sports Salvador Dalí-esque drooping leaves. But those leaves are actually tiny micro turbines, in which a rotor magnet assembly moves a blade across a power circuit. Each tree comprises 72 turbines designed to capture energy from even minimal wind. The devices accumulates and stores electricity, so that watts eventually turn into kilowatts.

Here's a close-up view of the turbines in action:

Each Wind Tree has the potential to generate about 3.1 kilowatts of electricity. That's a tiny amount compared to industrial-scale wind farms, but you wouldn't want to have one of those behemoths in your backyard anyway. A small version of the Wind Tree, in contrast, could fit nicely between the barbecue grill and the kids' swing set. One could even imagine a scaled-down version taking the place of weather vanes atop houses.

"Urban wind is not very strong, but it is very turbulent," New Wind engineer Julia Revuz told CNN last year. "These turbines need less wind to get started and produce around 3 kilowatts of energy, which could heat a small home, fuel lights or charge an electric car."

Don't get your credit card ready just yet, though — though New Wind hopes to have its product ready for export in 2017, the company's website doesn't indicate how much the Wind Tree costs, or when exactly it might become available in the United States.

This time-lapse video from earlier this year shows the installation of one of the wind trees: