Browse the article Can Adding Sand to Beaches Save Them? 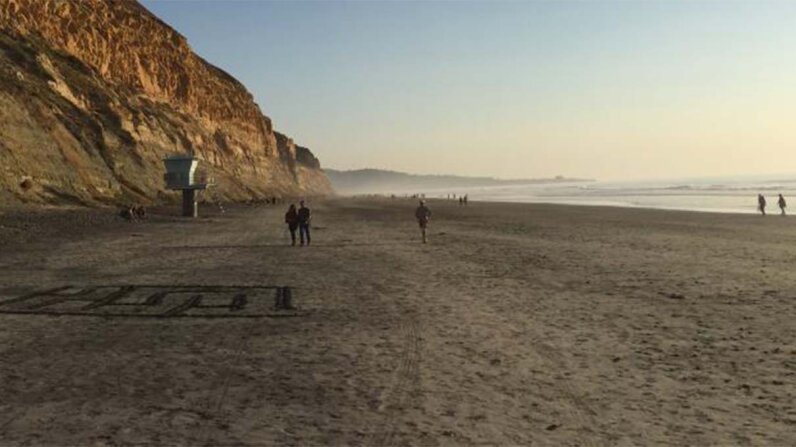 Torrey Pines State Beach north of San Diego, fall 2017. Most of the sand placed on the beach in 2001 washed away in a single storm, was stored in a large offshore sandbar and partially returned to the beach the following summer. Katherine Leitzell/California Sea Grant

In summer, there's nothing like feeling the sun on your face and the sand between your toes. But rising sea levels and stronger coastal storms associated with climate change pose a threat to the sands that make up our beaches. A common approach to combatting erosion at U.S. coastlines is beach nourishment, which is literally taking sand from one place, often offshore, and pumping it onto a sand-depleted beach.

The question is, can beach nourishment keep up with the ever-increasing forces of climate change or, like Sisyphus forever pushing his boulder up the hill, is adding sand to beaches an expensive, temporary fix to a long-term problem?

"I think there is reason to be concerned," says Bonnie Ludka, a postdoc at Scripps Institution of Oceanography at the University of California in San Diego, "but I also think there's still a lot we don't know about how long the sand stays, where it goes and how much sand you need to place on a beach to be effective. We're learning as we go."

A study published by Ludka in the June 2018 issue of the journal Coastal Engineering, examines exactly what happened to sand deposited on four beaches in San Diego County in California. She and her colleagues used jet skis, ATVs and other tools to continuously monitor sand levels and sand movement at the beaches over a period of about 10 years. The research received funding from the U.S. Army Corps of Engineers, California Department of Parks and Recreation, the National Science Foundation and California Sea Grant.

Among their findings, the team learned that the entire amount of sand added to San Diego's Torrey Pines in 2001 was washed away during a single storm. At another beach, the addition of 138 Olympic swimming pools-worth of sand contributed to the clogging and eventual closure of a nearby estuary. Among the team's more positive findings was that larger-grained sand appeared to have better staying power than finer-grained sand and, in some cases, the amount of sand deposited and removed from a beach by natural forces was higher than any mechanically added sand.

"There is quite a bit of natural variability so it's hard to pick out trends," Ludka says, "but at our longest recorded site we did see an overall pattern of erosion."

The pattern of erosion that Ludka's team observed at ground level is what's alarming to researchers assessing the long-term future of U.S. beaches. With climate change, sea level has risen by about 8 inches (20 centimeters) since 1900, according to the Intergovernmental Panel on Climate Change, and could rise 3 to 5 feet (0.9 to 1.5 meters) higher by the end of this century. More frequent coastal storms, also associated with climate change, take a further toll on beaches by unleashing rough waves that eat away at the shore.

"Any beach nourishment is forever — it's like painting a house — once you start it, you have to keep doing it forever to maintain," says Michael Orbach, professor emeritus of marine affairs and policy at Duke University. "The problem is, with climate change and rising sea levels, there's going to be even more demand by orders of magnitude because the beaches are going to erode more and faster."

Western Carolina University's Program for the Study of Developed Shorelines hosts an interactive database of beach nourishment projects across the U.S. and their costs. As the data show, beach nourishment today is not cheap. Orbach estimates the average cost of supplementing sand at beaches comes out at $1 million to up to $2 million per mile of sand. As the demand for sand for beach nourishment increases, the cost will rise even higher, Orbach predicts.

"In the end, there may not be enough sand that's economically recoverable to nourish every beach that people want to nourish," he says.

There's also an ecological cost. Studies have shown that dredging and depositing sand is disruptive to creatures living in the sand and the animals that eat them. While the research suggests those animals tend to recover after 18 months to two years, beaches that undergo repeated nourishment see significant declines in animal life.

Despite the economic and ecological costs of beach nourishment, it may be among the few available options for preserving beaches in the future. Sean Vitousek, an engineer specializing in ocean modeling at the University of Illinois at Chicago, points out that natural sources of beach sand, including rivers and eroding cliffs, have been suppressed by human-built dams and protective coverings. Vitousek served as lead author of a March 2017 modeling analysis from the U.S. Geological Survey that concluded if no measures are taken, up to 67 percent of California's beaches could be completely eroded back to sea cliffs or coastal infrastructure by 2100.

"If you just dump sand on a beach, that sand is not going to stay there forever," Vitousek says. "The current, methodical rate of beach nourishment is insufficient against the coming sea level rise."

"There is quite some debate about how climate change will influence the frequency and intensity of storms," Ludka says, "and these storms will be more responsible for beach evolution than sea level rise in the next few decades." It may become, Ludka says, a matter of choosing between investing in ever-pricier efforts to preserve beaches or standing back and allowing nature's forces to redraw the lines where ocean meets land.

Now That's Interesting
The first beach nourishment project may have taken place more than 2,000 years ago when, according to legend, Roman leader Marc Antony had sand shipped from the Egyptian desert to a beach in Turkey so that his lover, Egyptian queen Cleopatra, would be able to step on soil from her homeland as she came ashore. The beach in Alanya, Turkey, is now known as Cleopatra's Beach.