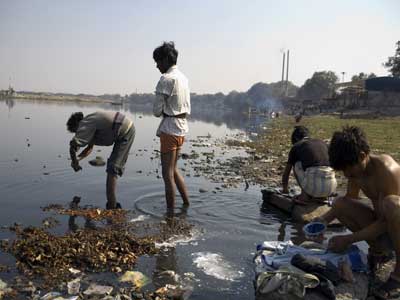 ­The United Nations (U.N.) calls it a "hidden global scandal" [source: U.N.]. UNICEF reports that it "sickens thousands of children every day" [source: UNICEF]. What's the culprit? A familiar compound of a single hydrogen molecule bound to two oxygen molecules -- with a lot of harmful bacteria mixed in.

In the United States, we're urged to drink eight 8-ounce glasses of water per day to improve our bodies' nutrient uptake, digestion, skin appearance and more. For most Americans, this is a simple proposition since water is usually a few steps away at the nearest faucet. However, it's a different story in places like South Asia and sub-Saharan Africa, where two-thirds of the population have no access to drinkable water or sanitation resources [source: UNICEF].

­When clean water isn't available, as is the case in many developing countries, unclean water may do more harm than good. First, the bacteria found in untreated water sources can make people sick. In neighborhoods and villages without proper bathrooms or toilets, fecal matter and urine may also taint the water supply. On top of that, water stored improperly in open containers can become contaminated.

We aren't talking about small clusters of people here and there who have no potable water. Nearly 40 percent of the global population lacks dependable access to clean water and sanitation facilities, fostering squalor and the spread of disease [source: CDC]. Common water-borne illnesses include: ­

Along with a nasty set of related diseases, the scarcity of water accounts for 1.6 million diarrheal deaths -- mostly children -- every year across the world [source: CDC]. The World Health Organization (WHO) estimates that one-tenth of global disease could be eradicated with better water management and supply practices [source: WHO].

­But how do you confront an issue that affects a group almost as large as the population of China that lives in areas with severely limited resources? A team of designers from California thinks that a shiny blue tricycle might solve a piece of that puzzle.