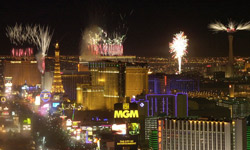 The Strip might not be particularly green (unless it's neon green), but Las Vegas has high solar potential.
AP Photo/Laura Rauch

If you've only seen the neon-soaked Strip, you probably don't think of Las Vegas as a particularly eco-friendly city. But in fact, it's a pretty "green" place to be, with cash incentives to replace grass with drought-tolerant landscaping and a couple of hydrogen gas stations in town owned and run by the government.

And then there's the solar-power potential: Las Vegas is one of the sunniest cities in the country. Nevada requires that state utilities gather 15 percent of their energy from alternative sources; and by 2015, 5 percent of that will have to come from solar [source: Kanellos].

It makes sense: Among major cities, Las Vegas ranks fifth in insolation value, coming in at 6.41. That means every day, the sunlight that hits a single square meter of Las Vegas could generate 6.41 kilowatt-hours of electricity.

That's due in part to about 20 percent more sunny days than the United States average, along with little rainfall. Las Vegas also has less humidity in the air to interrupt the path of sunlight to solar panels -- about 60 percent less than the national average on a summer day [source: City-Data].

Plus, you could use some of your monthly energy savings at the craps table (once you pay off the solar panels, of course).