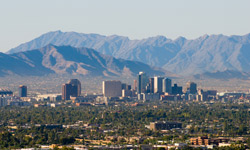 Phoenix boasts a whopping 306 days of sun a year.
©iStockphoto.com/Davel5957

Not to be outdone by the other Arizona city on the list, Phoenix has its own major solar project going. It is perhaps less innovative but is far more likely to happen: The Phoenix Suns stadium is, appropriately, running on solar.

Those resources are abundant. Phoenix boasts 306 days of sun and just 8.4 inches (21 centimeters) of rain in a year [source: Sun National]. In June, the chance of a sunny day in Phoenix is 95 percent, and it hits the low end of the sunny scale in December, when that chance falls to about 75 percent. Phoenix's insolation value is 6.58, ranking it just a hair above Tucson on the list [source: CleanBeta].

No. 2 on our list, El Paso, Texas, offers more of an insolation jump.