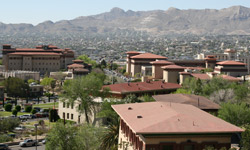 El Paso has a lot of sun hit those rooftops every year.
©iStockphoto.com/JCMeyer

In March 2009, the Texas state legislature reviewed almost 70 renewable-energy bills in its "solar session." With a solid 50 of those bills addressing solar-power technology and incentives, the session was a prime example of Texas' intention to boost its involvement in solar power [source: Galbraith].

Texas is a U.S. leader in wind power, and it has the potential to be a significant force in the solar industry, too. A bill passed in May 2009 makes the development of solar-power plants in the state a far more profitable proposition [source: Ward].

The solar potential in El Paso alone is worth the effort. Coming in at No. 2 on our list, El Paso has 6.72 kilowatt-hours of solar radiation hitting every square meter of the city every year. Almost 300 days of sunshine in a year, 8.39 inches (21 centimeters) of annual rainfall and humidity 20 to 30 percent less than the national average provides a clear path for the sun's rays to reach the ground -- or a roof-based solar-panel array [sources: Infinite Power, City-Data].

The No. 1 city on our list has even more sunlight available to harvest. Albuquerque, N.M., may just be the best place to build a solar home.