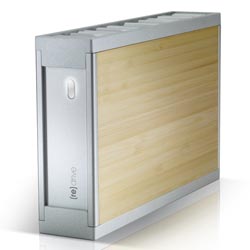 There is no accepted standard of what makes a "green" gadget. Many device-makers would like to lay claim to the green mantle but fall short -- for example, by claiming meager energy savings over other devices that are out-of-date or energy hogs. Also, by buying a new green product, you may actually be polluting even more, as it takes energy and resources to build and transport a new product, although many old appliances can be recycled [source: Tugend].

There are also misconceptions about what qualifies as green. It's tough to call plastic green, as it's made out of petroleum and can't biodegrade through natural processes. But plastic is lightweight, cheap, relatively sturdy and recyclable.

A battery does not necessarily equal green because its energy still has to come from somewhere. In 2006, 48.97 percent of the United States' electricity consumption came from coal, which is environmentally destructive to extract and to burn [source: Energy Information Administration].

Something packaged in wood, like some computers from Dell and Asus, are not necessarily green. Where does the wood come from? Is it harvested from sustainable forests? What type of material does this product normally use instead of wood? If the answers are that it's sustainable wood or bamboo -- which grows very quickly and abundantly -- and that it's used in place of a metal and plastic casing, then the manufacturer has succeeded in lowering its product's environmental footprint. Unfortunately, such products are often marketed as breakthroughs when, in fact, they may be more expensive, limited edition models. The Asus U6 Limited Edition Bamboo Notebook is a beautiful, relatively energy efficient laptop, but is it possible to call it a step forward if it's relegated to limited edition status?

With these ideas in mind, we gave deference here to devices that do not use any energy at all or that find novel ways to rethink a common gadget while also making environmental improvements. We also examined what makes that most ubiquitous of machines -- the personal computer -- green. 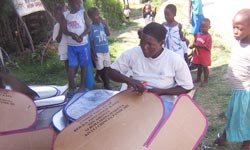 Solar cookers are inexpensive and simple to make -- most require only cardboard, foil and a pot.
Solar Cookers International

Solar cookers are exactly what they sound like: devices that harness the power of the sun to cook tasty dishes. The lack of smoke means that you're not polluting the environment or your lungs, and you'll save money on coals and wood. For their convenience, cost and lack of an environmental footprint, they've also been promoted as potentially beneficial for the developing world.

There are several solar ovens on the market, and the Sun Baked Solar Oven is one of the more impressive we've seen. This metal and glass device -- which includes a sundial -- allows you to cook food without using electricity or burning materials. Other fine solar cookers include the SOS Sport or the SOUL solar oven, although the Sun Baked oven appears more versatile than the other two.

The Baja BBQ Firepack is not quite as green as a solar oven, but it's a step in the right direction. It's a paper-pulp container that contains 2 pounds (907 grams) of charcoal, which is actually fairly environmentally friendly. Instead of burning charcoal with lighter fluid, which releases Volatile Organic Compounds (VOCs) into the atmosphere, simply light the Firepack's packaging and soon enough it'll burn away, leaving you with hot coals perfect for cooking.

And while you're outside, why not use Garden Solar Insect Zappers as an electricity- and smoke-free method of keeping bugs away? 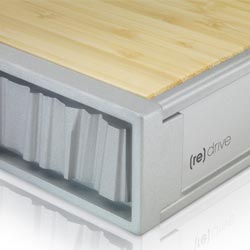 SimpleTech's external hard drive is innovative in several ways. First, it does away with nearly all packaging -- there's no plastic and the cables are taped to the box. The installation guide is printed on the inside of the box, eliminating the need for a paper manual that will simply be thrown away or recycled later. The box itself is made of recycled materials.

Large sections of the drive's housing are made of bamboo, which, as we mentioned in the introduction, is an abundant, easy-to-grow plant. The bamboo is grown near the manufacturing facility and isn't treated with chemicals.

SimpleTech, a Hitachi subsidiary, engineered the drive to have no fans, cutting down on electricity consumption. Instead, heat is diffused through the recycled aluminum casing. The drive itself is low power and its power adapter is rated Energy Star Level 4.

With a competitive price, multiple drive-sizes, environmentally friendly construction and positive reviews, this is the greenest external hard drive out there.

Smart meters are an increasingly popular method for tracking one's electricity consumption. By having detailed information about one's energy use, it's much easier to make decisions about how to cut down on power-hungry electronics or to learn when it's cheaper to run certain appliances.

Similarly, the Kill A Watt Power Strip empowers the user with information. In its construction, it's really not that green -- it's made with plastic, like most power strips -- but by providing real-time statistics about the devices plugged in the strip, you'll be able to do even more to cut down on energy use.

Say you suspect an old appliance isn't working properly or is sucking up a lot of energy. Plug it into the strip -- which also provides information about line frequency and current leakage and protects against surges -- to find out. The strip can also estimate costs for running devices by the day, week or year.

A Different Kind of Power Strip

The Powerbrella is an impressive variation on the power strip: a freestanding umbrella with solar panels that power devices plugged into integrated electrical outlets. 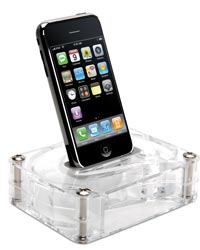 Here we go again, breaking our own rules. The Griffin AirCurve is made out of a polycarbonate, meaning a plastic. But it earns its green stripes by acting as a speaker that uses no electricity.

It's more accurate to call the AirCurve an amplifier. It takes the sound from the built-in speakers of an iPhone and amplifies it an impressive 10 decibels [source: Griffin]. There's also an incorporated slot through which you can slide a cable to keep your iPhone charged. The result may not appeal to audiophiles, but for basic users, the $20 AirCurve is a cheap, energy-free method of turning your iPhone into a mini-boom box. One reviewer pointed out that it might be more useful for amplifying podcasts or if you use your iPhone as an alarm clock [source: Kriegel].

How does it do it? The AirCurve's elegant design features a "horn" whose sinuous form may remind you of a seashell. (Think about how holding a conch shell to your ear amplifies the sound contained in your ear.) The shape of this "coiled waveguide horn" -- as Griffin calls it -- manipulates incoming sounds so that they are amplified when they come out on the other end.

The more than 1 billion personal computers in the world use a tremendous amount of energy [source: Chapman]. Information technology companies, taken together, produce more greenhouse gas emissions than the airline industry [source: Keller]. But which computers are the most energy efficient? It depends what you're looking for.

In July 2009, Green500 compiled a list in which IBM had 18 of the 20 most energy efficient computers. The best among them: Warsaw University's IBM BladeCenter QS22 supercomputer cluster, which can, with one watt of energy, compute 536.24 million floating-point operations per second [source: Burt]. (When talking about supercomputers, we're really dealing with clusters -- many machines that work quickly and in tandem, working so well that they can be considered a single machine.)

The average consumer is unlikely to use a supercomputer -- which do anything from complex mathematical computations to modeling the universe after the Big Bang -- so which personal computers are the most green? In a June 2009 test, CNet found that Apple's 20-inch iMac was the most energy efficient all-in-one desktop, with an estimated annual energy cost of $12.78 [source: Brown]. The iMac, along with the other computers tested, qualifies for Energy Star Level-5 certification.

As for laptops, the crown for most energy efficient is always shifting, but look for that Energy Star certification. The environmental group Greenpeace has given credit to Apple, Acer and Toshiba for cutting down on harmful materials like brominated flame retardants and PVC plastics.

For more information about green gadgets and other eco-conscious topics, look over the links on the next page.