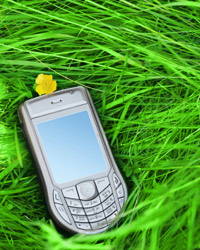 The green craze has been around for a few years and shows no signs of slowing down. Governments around the world are supporting environmentally friendly initiatives. As a result, many companies, organizations and individuals are hopping on the green bandwagon. In the best cases, their efforts make it easier for people to live, work and play without impacting the environment in a negative way.

Meanwhile, our love for mobile devices continues to grow, too. The Apple iPhone helped usher in the era of the consumer smartphone in the United States. Before the iPhone, most smartphone owners were either early adopters or corporate executives. But the stylish iPhone convinced many average consumers to take the plunge and buy a mobile device for the first time.

Before long, we saw other powerful mobile devices make a splash in the consumer market. Phones like the Nokia N95 or the HTC G1 introduced the general public to the wonders of mobile computing.

So it should come as no surprise that mobile device application developers have found a way to marry the public's love of smartphones with the increasingly popular green lifestyle movement. We're going to look at five applications, listed in no particular order, designed to make it easy to be green on the go.