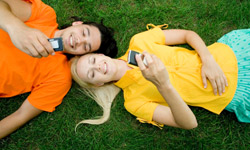 If you care about the environment at all, disposing of electronics is seldom a simple task. You can't just throw them in the trash bin, and recycling them often costs a chunk of cash -- if you can even find a place to do it. If you're lucky, there's an electronics store near you with promotional free-recycling days, or, if the piece of electronics in question is a cell phone, you can find a nearby donation drop-off for a charity.

Why the hassle? Electronics components, and cell phones especially, are made of dangerous substances. A mobile phone is made of hundreds of different substances, some of which are toxic, including PVC, phthalates, zinc, lead, brominated flame retardants and arsenic [source: Reedy]. When a cell phone ends up in a landfill, it sits there, and sits there, sometimes for hundreds of years, giving those toxic substances lots of time to leach into the ground and water supply.

Thus the focus on recycling or donating your mobile phone -- beyond conserving manufacturing resources, it's crucial keep it out of a landfill. But more than 80 percent of the 150 million phones discarded each year still end up in the trash [source: Wenzel].

In response to heavy criticism, the mobile-phone industry has begun to focus heavily on greening up its product. In 2006, Nokia introduced a whole line of phones and accessories free of PVC, and in 2008, the company marketed the first phone with no toxic flame retardants [source: Reedy]. LG removed harmful beryllium from its phones and is researching both environmentally friendlier paints and biodegradable plastics for its products [source: Reedy]. It's not an easy process, since eco-friendly plastics are still a new industry and are not always as sturdy as the traditional stuff [source: Reedy].

All of the top handset makers are getting in on the "green phone" trend to varying degrees. In this article, we'll look at five of the best examples of eco-friendlier phones and find out what makes them greener than their traditional counterparts.

At No. 5, we've got a phone from Sony with a reduced carbon footprint.

Sony Ericsson is making some pretty far-reaching changes in its handsets. The company has stated that it plans to reduce the carbon footprint of its entire body of products by 15 percent by 2015, and the C901 GreenHeart is a step in that direction [source: LCE].

Manufacturing and using the phone, according to Sony, results in 15 percent fewer CO2 emissions compared to other Sony models [source: LCE]. It achieves this reduction through a variety of eco-friendly features, including a casing made of 50 percent recycled plastic, electronic instead of paper user manuals, and a lower-energy display. Sony also painted the phone using water-based (instead of solvent-based) paint and created a 100-percent-recycled-plastic headset to go along with it.

Some other, non-environmental features:

The C901 GreenHeart is scheduled for release by the end of 2009.

Up next: an alternative-energy phone.

Currently a late-stage prototype without a fancy name, LG's solar-powered phone is one of a very few handsets to harness alternative energy as part of its design.

LG, like Sony, is on the green bandwagon but in a good way. The company has promised to remove a bunch of toxic substances (like brominated compounds and PVC) from its handsets by 2010, and another bunch by 2012. Along those eco-lines, this new solar-powered phone doesn't have to be plugged in to charge.

It has a solar panel built into the back of the handset, as part of the battery cover. If it's sunny enough, you could go without a plug -- at least briefly. Ten minutes of sun exposure will get you three minutes of talk time. With continuous exposure, the phone can stay in standby mode on solar power alone -- but the solar power is mostly a "top off" feature in this phone.

Details on features are a bit scarce now, but as for availability, the company says the phone will be on sale in Europe by the end of 2009 [source: LG]. It will ship in packaging made of recycled paper and soy inks.

Up next, the Motorola Renew. 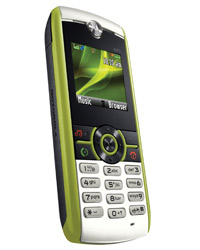 Motorola has come up with a phone it's touting as "carbon neutral." The neutrality doesn't come so much from the way the Motorola W233 is built, although the phone does boast some nice green features.

For one thing, the phone's casing is made entirely from recycled plastic water bottles. And according to the company, producing the Renew requires 20 percent less energy than producing some other Motorola models [source: Ganapati]. The Renew conserves paper, too with its smaller packaging, which is made from 100 percent post-consumer recycled paper.

The "carbon neutral" feature is more about Motorola than it is about the phone. Motorola buys carbon offsets to cover the emissions produced in the production, distribution and use of the Renew throughout its lifetime. And the phone ships with a pre-paid envelope for recycling the handset when that lifetime is over.

Up next, a solar phone that's fully solar.

All of the phones we've looked at so far are green by choice, following a trend toward building devices that are less damaging to the Earth and human health. The ZTE Coral 200 Solar is green by necessity. It's designed for "off the grid" areas where plugging in to recharge a phone is not really an option.

The Coral 200 is totally solar. A built-in solar panel recharges the phone's battery. It doesn't have many bells and whistles -- it's a pretty basic phone for basic service needs -- but for 2 billion people with limited access to conventional electricity, it's an ideal mobile phone.

Jamaica's DigiOrder Web site reports the phone comes with 16 ringtones and weighs 2.3 ounces (64 grams) [source: DigiOrder]. Beyond that, specs and features are mostly unknown at this point. The Coral 200 should be available in limited markets in the second half of 2009.

Up next: a green phone with all the features.

Samsung has developed an eco-friendly phone that could be as popular as it is eco-friendly. It comes with an integrated solar panel that Samsung says reduces up to 34.6 percent of battery power; with one hour of sun exposure, the phone can give you 10 minutes of talk time, and 12 hours of sun will get you 4 hours of talk [sources: Miller, Engadget, SBE]. The casing is made from both renewable materials and recycled plastic; and the phone is free of toxic brominated compounds and phthalates.

Blue Earth is loaded with other green functions, like a one-touch energy-saving display mode, an energy-efficient charger and applications like "Eco Walk," which tracks how many steps you take and tells you how much CO2 you're saving by walking instead of driving. And on top of the "I'm so green" functions, it has a full-color touch screen.

Full specs and features aren't out yet, but it was unveiled to the 2009 Mobile World Congress to much excitement. The phone is slated to be available in Europe by the end of 2009 [source: LaGesse].

For more information on green mobile phones and related topics, look over the links on the next page.