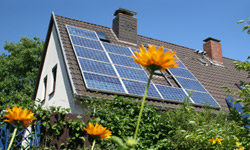 Since residential solar-power setups can be expensive, it's important to know what you're getting into.
iStockphoto.com/AndreasWeber

In the last 10 years, homes with rooftop solar arrays have gone from curiosity to commonplace. It's a trend perhaps best exemplified by Home Depot's decision to start stocking solar panels in 2001 [source: DOE].

The technology has been available for decades -- NASA has been using solar-powered satellites since the 1960s, and as far back as World War II, passive solar heating systems (which turn solar energy into heat instead of electricity) have been used in U.S. homes [sources: Southface, DOE].

Getting active solar systems in the mainstream residential market has proved a challenge, though. Active solar power uses arrays of photovoltaic cells to convert sunlight directly into electricity, and it has traditionally been a prohibitively expensive technology.

The benefits of residential solar power are obvious: Energy from the sun is endless (at least for the next 5 billion years, give or take); it provides clean energy with no greenhouse-gas emissions; and it can save people money on their electric bills [source: APS]. But there are factors to consider when deciding whether solar power would be a good choice for you -- and cost is only one of them.

In this article, we'll look at five of the most important issues to address when you're thinking about investing in a residential solar-power setup. Using photovoltaic energy is a very green and potentially rewarding move, but it's not quite as straightforward as getting your power from the established electrical grid.

The first consideration is one you may not have thought of: Do you have to do anything to the solar panels once they're up there on your roof? 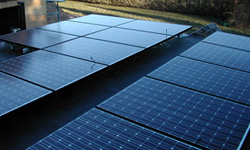 Powering your home using solar energy does require more maintenance than using the regular old grid power. But not much.

Solar panels have no moving parts. They are part of a completely stationary system. So once they're installed, there's not a whole lot that can go wrong. Pretty much the only thing a homeowner needs to do is keep the panels clean. It's an important task, though -- too much dust and bird droppings on the panels can reduce the amount of sunlight striking them. Dust buildup can reduce the amount of electricity produced by the system by as much as 7 percent [source: CalFinder].

This type of maintenance is not something that needs to be done once a week, though. You'd probably only have to hose the panels down anywhere from one to four times a year [source: CalFinder]. You don't need to get on the roof. A hose and nozzle from ground level works fine. If there's construction in your area, you may have to clean the panels more often to avoid the extra buildup of construction-dust residue.

Aside from that, you're just looking at occasional check-ups to make sure all parts are in working order. You may eventually have to have the inverter replaced (and the batteries if you have a battery-storage system), but that's a once-a-decade type of maintenance event.

Up next: Got a lot of trees on your lot? 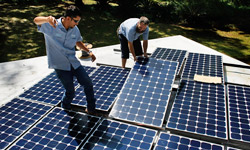 Workers install a solar panel system on the roof of a home in Gainesville, Fla.
Joe Raedle/Getty Images

Where your home is situated has a big effect on your solar-power efficiency. It's an obvious concern: If your electrical-power generation depends on sunlight, things like towering shade trees and tall, shadow-casting buildings are going to be a problem.

So to build a solar-powered home, it's necessary to make sure there are no shadows on the roof's panel area during the sunniest hours of the day (typically from 10 a.m. to 2 p.m.), and preferably during all sunny hours [source: AEG]. The more hours the panels spend exposed to full sun, the more efficient the power generation will be.

Achieving the greatest efficiency level might mean cutting back trees on your property (and keeping them cut back). If your home is surrounded by tall buildings that block the sun from your roof, this is a much bigger problem.

Which brings us to the next big consideration: sunlight. 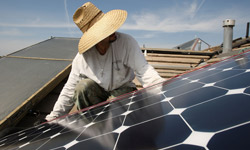 Sunlight is obviously key when it comes to solar power, and not all regions are created equal in this regard. It's important to know how much sunlight reaches ground level in the area where your potential solar house is located.

What we're talking about here is insolation -- a measure of how much solar radiation hits the ground in any given area in a specified time period. It's typically measured in kWh/m2/day, and it tells you how much sunlight will be available for your solar panels to turn into electricity. The higher the insolation value of your location, the more electricity each of your panels will be able to generate. A high insolation value means you can get more power out of fewer panels. A low insolation value means you could end up spending more to achieve the same power output (more on expenses later).

Does that mean you have to build your solar-powered home in the Southwest instead of the Midwest? Not at all. It just means that in Chicago, a solar setup is going to be less efficient than a similar setup in Albuquerque. You're probably going to need more panels to achieve the same power output.

That brings us to No. 2 on the list: How many panels do you need? 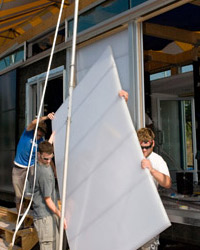 Contrary to what most people think, the size of a solar-power installation has nothing to do with the size of the house it's powering.

Instead, it's all about two things: insolation, which we just discussed, and how much power you need. If you live in Albuquerque and you don't use much power, you need a smaller system. If you live in Chicago and run a circa-1980 electric furnace all day every day, you're looking at a lot more panels on your roof.

To get a very rough estimate of how big a system you need, look at your electric bill and figure out how many kWh you use per day. The average home in the United States uses about 900 kWh every month, or about 30 kWh per day [source: DOE]. Multiply that by 0.25 [source: GE]. We come up with 7.5, so we need a 7.5 kW system.

There's more that goes into this calculation, though. You have to figure in insolation and how many hours of peak sunlight you get per day, and you'd also make adjustments if you're using a battery-storage system with the panels. So it's best to consult a pro.

But assuming this is roughly the system you'd need to power your home, how much of a financial investment are we looking at for a 7.5-kW solar setup?

Up next, perhaps the greatest consideration of all: the expense. 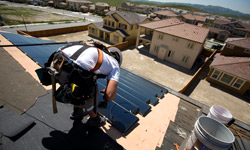 In 1956, solar panels ran about $300 per watt [source: Southface]. A 7.5-kW system would have been out of the question for all but the shockingly rich.

If you need less electricity, of course, the number gets lower. If you only consume 600 kWh in a month, or 20kWh/day, you could supply all the energy you need with a 5-kW system. That would cost closer to $40,000.

Of course, it's not an all-or-nothing arrangement. You can always partially power your house using solar. If you want to invest in a $10,000 solar array, you can supplement grid energy with a 1.5-kW solar system.

Still, tens of thousands of dollars for a solar array is still pretty cost-prohibitive -- especially since it can take decades to make that money back in energy savings [source: WeatherImagery].

Along those lines, a recent development in the solar-power industry puts solar panels within reach of those who don't have thousands of dollars to spend on clean energy. There are companies now across the country that rent out solar panels. There's no upfront charge. Homeowners pay a monthly rental fee to use the panels, and the rental company owns and maintains them. This could remove the huge cost consideration from the equation.

For more information on solar and related topics, look over the links on the next page.