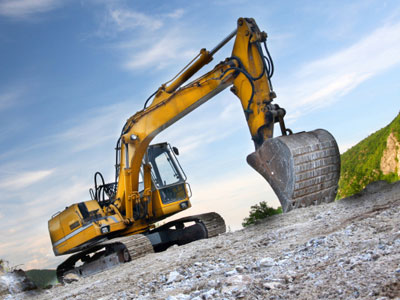 When this big digger needs an oil change, you can't just drive it down to the local service station. See more green science pictures.
©iStockphoto.com/damaianty

An engine has hundreds of metal parts that move against other metal parts. Left unchecked, friction between those moving parts would turn a powerful machine into an inert piece of sculpture.

To prevent this from happening, oil bathes the innards of an engine, coating its parts and allowing them to slip and slide with relatively little resistance. Over time, however, oil gets dirty and loses its effectiveness. Traditional oil filters are meant to clean the lubricating fluid, but even they have their limits. Eventually, both the oil and the filter have to be replaced. This seems like a good solution until you realize that all of that oil has to go somewhere. According to the Environmental Protection Agency, 200 million gallons (757 million liters) of used oil are improperly disposed of each year. That oil can contaminate groundwater, foul beaches and harm wildlife [source: EPA Common Wastes & Materials, "You dump it, you drink it"].

Even beyond the environmental issues, changing oil has other problems. Inefficiency is the biggest problem of all. When oil is allowed to drain, as much as 40 percent of it remains in the engine, clinging stubbornly to surfaces in rams and plumbing [source: Oil Solutions N.Q.]. That means new oil added to the engine mixes with dirty, contaminated liquid left behind after the last changeover. And this puts a vehicle even closer to its next oil change.

Centrifugal oil cleaners were introduced to help with these problems. They take advantage of a well-known force -- centrifugal force -- associated with circular motion. Technically speaking, centrifugal force doesn't exist in inertial frames of reference, but in everyday usage, people understand it to be the force directed away from the center of an object rotating in a circle. We use it to explain how water is spun out of wet clothes in a washing machine or, in the case of centrifugal oil cleaners, how contaminants are separated from oil that is spun at very high revolutions per minute (rpm).

At first, centrifugal oil cleaners were used primarily on diesel engines, especially those of heavy-duty vehicles such as earthmovers and tractors. But now they are enjoying widespread use in many industrial applications. They can either be permanently fitted to an engine or mounted on a trolley, which can be moved near machinery that needs its lube oil cleaned. In principle, both types of cleaners work the same way, but this article will focus on portable centrifugal oil cleaners. Let's start with the basics: the parts and the process.

When you're driving a regular car, it's easy enough to get your daily transport to a garage that provides oil changes. But if you're operating a 55-ton (50-metric-ton) wheel loader, it's a little bit more difficult to cruise down to the local service station.

For vehicles of this size, it makes more sense to change the oil at the work site. And portable centrifugal oil cleaners are the perfect solution. The centrifuge is mounted to a cart or trolley, which maintenance personnel can move from one piece of equipment to the next.

The great thing about portable centrifugal cleaners is that they can do their work while the vehicle or machine continues to run. In this way, they function a bit like a heart/lung machine used during open-heart surgery. An input line carries oil from the vehicle to the centrifuge, where it is cleaned and filtered. Then an output line delivers clean fluid back to the vehicle.

The heart of the system is the centrifuge, so let's take a closer at its three main parts:

Body: The aluminum body, which houses the rotor and the drive chamber, allows the whole system to be mounted to an external structure, either an engine, cart or trolley. Dirty oil enters the centrifuge through an inlet at the base of the body. Oil travels up through a hollow spindle until it encounters a baffle at the top. The baffle distributes the oil uniformly into the centrifuge rotor.

Rotor: The rotor does the real business of cleaning. Oil pressure within the rotor causes the assembly to rotate within the outer body at speeds between 6,000 and 7,500 rpm. This in turn creates a centrifugal force that is 2,500 times greater than gravity. Under the influence of such a strong force, particles down to one-tenth of a micron move radially toward the wall of the rotor, where they form a dense cake. In some models, the dirty rotor is simply replaced with a new one; in other models, the rotor is cleaned and reused.

Drive Chamber: Clean oil exits the rotor and enters the drive chamber through two opposing jets, creating the propulsive force that drives the rotor. Eventually, the oil exits the centrifuge at the base and returns to the engine.

The result: Oil that's almost as good as new, which, as we'll see in the next section, is better for the vehicle, the company that owns it and the environment.

Given the cleaning efficiency of centrifugal oil cleaners, you might wonder why they aren't common among consumer vehicles. The higher cost of these systems is one reason. But another reason has to do with the generally undemanding nature of normal highway driving. Commuting back and forth to work or to the mall puts much less stress on engine oil than off-road driving. Still, some auto manufacturers are fitting their vehicles with the more advanced oil-cleaning systems. In 1998, Land Rover started equipping its 4x4 Discovery (now the LR3) with centrifugal oil cleaners as standard equipment. The vehicle could go an additional 6,000 miles (10,000 kilometers) before needing an oil change.

And while diesel engine oil is the most common type of lubricating fluid cleaned by portable centrifuges, other fluids are fair game. These include hydraulic engine oils, gearbox oils and transmission fluids. For example, MANN+HUMMEL has installed its centrifugal cleaning system on the transmissions of certain Massey Ferguson tractors, extending the transmission fluid life to 1,000 hours -- approximately 10 times longer than one might get with a traditional filter [source: MANN+HUMMEL online brochure].

Obviously, extending the life of lubricating oils has several benefits. Vehicles don't have to be serviced as much, which lowers maintenance costs. And because portable centrifugal cleaners remove more contaminants, engines experience less wear and tear and perform more efficiently. This is another major cost-saver for companies with large fleets.

But the biggest winner is the environment. More and more countries are proposing or have already passed legislation calling for safe disposal of all engine waste products. In the United States, several states prohibit disposal of oil products and oil filter elements in landfills. Centrifugal cleaning systems separate oil from contaminants so efficiently that the waste is considered harmless and can be disposed of accordingly. More importantly, these systems allow oil to be reused many times, which means less oil makes it into soil and water.

For all of these reasons, but primarily for their ability to turn black oil green, portable centrifugal oil cleaners may become more common across a variety of industries and applications.

For more information, visit the links on the following page.