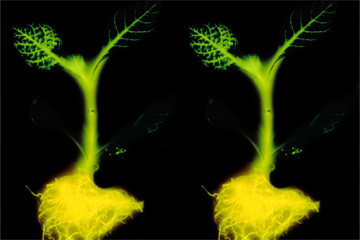 Witness a luminescent transgenic tobacco plant containing the firefly luciferase gene. Can you read a novel by that light or what?
© ScienceVU/Keith Wood/Visuals Unlimited/Corbis

Early in May 2013, the U.S. government ordered a Texas-based nonprofit to remove blueprints for a dangerous device from its Web site. The item? The Liberator, a working plastic gun banged off on a several-thousand-dollar, industrial 3-D printer. The blueprints were downloaded an estimated 100,000 times. They likely still exist on the Web [source: BBC].

We live in an age when "do-it-yourself" has taken on exciting and nerve-wracking connotations, from writing a killer app to building a DIY nuclear reactor [source: Clynes]. As cheap 3-D printing grows capable of ever-more complex tasks, we might soon fabricate our own toys, furnishings -- even household electronics [source: Dillow]. Plug in the Internet's deep and expansive knowledge base and the fiscal power of crowdfunding sites like Kickstarter, and you have a recipe for a transformed world.

But are we ready to release so many genies from so many bottles at once? Before you answer, consider that some of those bottles are labeled "bacteria" and "DNA," tools in the budding cottage industry of DIY biotechnology. So which is more dangerous: synthetic and genetically modified life, or a printable gun?

Such were the questions raised by environmental groups when synthetic biologist Omri Amirav-Drory, plant scientist Kyle Taylor and project leader Antony Evans began the Glowing Plants Kickstarter campaign to "create real glowing plants in a do-it-yourself biolab in California" [sources: Evans; Paramaguru; Pollack]. Like Public Broadcasting Service donors, Kickstarter campaign contributors receive pledge rewards, but these are no tote bags: Instead, anyone who kicks in $40 will receive seeds for growing their own glowing plants.

Harmless? Perhaps, perhaps not. Either way, it amounts to the unregulated spreading of a genetically modified life-form.

As of June 5, Glowing Plants had amassed 7,858 backers and more than $451,207 in funding. Having blown past its initial $65,000 goal to grow radiant Arabidopsis thaliana -- a weedy mustard relative and favorite plant guinea pig -- it was fast approaching its $500,000 stretch goal. The research could one day lead to a host of lighting solutions that, according to Evans, would make a sizable dent in our carbon footprint [sources: Evans; Paramaguru; Pollack].

Evans and company are far from the only game in town. Researchers in Taiwan are looking into diffusing gold nanoparticles into tree leaves to make them both glow and photosynthesize, removing carbon from the air [sources: Beck; Nagano]. Closer to home, Alexander Krichevsky, who directed the Stony Brook University research that helped inspire and power Glowing Plants, has founded his own company, BioGlow, to market shining ornamental foliage [source: Pollack].

All of which leaves one glaring question: Will the plants even work? Will we soon read a book by rhododendron or drive a car by larch-light?

Getting the Green Light

They say that mighty oaks from little acorns grow. Lighted oaks require a little help from science though.

But plants that require a black light to shine aren't much use for driving or reading. Such applications require a light-shedding chemical reaction, a kind of germinating glow stick.

In 1986, University of California at San Diego (UCSD) researchers created just that when they modified a tobacco plant to produce an enzyme called luciferase. As any firefly can tell you, when luciferase reacts with ATP, an energy-storing molecule used in metabolism, and luciferin, an organic molecule, it emits light [source: Monastersky].

UCSD's plant was limited in one important regard, however: It didn't make its own luciferin, so it was unable to, so to speak, glow it alone. In 2010, researchers at Stony Brook University overcame this limitation by slotting six luciferin-coding genes from bioluminescent marine bacteria into genetic material located in the plant's chloroplasts (plant structures that hold photosynthetic pigment). Et voila, autoluminescent tobacco -- presumably for recovering smokers who like to light up without lighting up [sources: Evans; Krichevsky et al.; Paramaguru; Pollack].

Unfortunately, the Stony Brook plant shone so dimly it required five minutes in darkness for human eyes to perceive it [source: Pollack]. Worse, the glow gradually self-destructed as the luciferin fueling it was converted into oxyluciferin [source: Swain].

One possible way out of this chemical cul-de-sac came in 2010, when a University of Cambridge iGEM team (see sidebar) inserted genes from fireflies and bioluminescent bacteria into modified E. coli, creating a process that recycles oxyluciferin back into its glow-friendly precursor. Their process also boosted light output sufficiently that a wine-bottle-sized bacterial culture emitted enough light to read by. Finally, Evans and company had the pieces they needed for a renewable and self-sustaining plant light [sources: Evans; iGEM; Swain; Timmer].

But whereas glowing markers encompass vital research and medical applications, the point of a glowing tree -- even one with potentially positive environmental effects, assuming Evans is right -- leaves many observers stumped.

In May 2010, using the equivalent of a DNA printer, genetic luminary Craig Venter's Celera team created the first synthetic life-form. Today, DNA foundries are a growing business, and some experts argue that we are only a decade out from printing Internet-sourced recipes at home [source: Wadhwa].

Indie-Glow? Or Not a Glimmer of Hope?

However much or little Evans and company ultimately accomplish with Glowing Plants, not everyone shares their enthusiasm for the prospect of crowdsourced, home-grown, synthetic "genegeneering." Some question the project's safety, while others focus on its validity and financial ethics.

According to The New York Times, the environmental groups Friends of the Earth and the ETC Group have contacted U.S. Agriculture Department to head off the project and its potential "widespread, random and uncontrolled release of bioengineered seeds." As for the money, Evans told the Times that he will devote some Kickstarter funds to exploring related public policy issues, but many commenters remain skeptical [source: Pollack; Timmer].

So how scary are these trees? Could they pollute the environment with pixie pollen? It's hard to say. The process Glowing Plants will use resembles the one developed at Stony Brook University, which affected chloroplasts. In most flowering species, chloroplasts are maternally inherited -- passed on by seed, not pollen -- which reduces the risk of environmental contamination by, say, glowing roses, but many trees fall outside of this category [source: Krichevsky et al.].

Meanwhile, numerous practical questions await answers as well: How much energy could such plants afford to allocate toward light production? And how brightly will they ultimately shine [sources: Pollack; Timmer]?

The problem is energy. Although the total solar radiation striking an average tree outstrips the amount required to power an effective streetlight, only a small fraction of that insolation reaches a tree's leaves -- and only a small portion of that falls within the wavelength band required for photosynthesis. The tree must then apply a sizable portion of this energy to living and growing, leaving only a fraction of a fraction of a fraction available to generate light -- to say nothing of the energy required to fabricate the necessary chemicals. The problem would only worsen in winter, when available sunlight dims and trees enter a metabolic stasis bound to kill their chemical shine [source: Timmer].

And that's the root of the problem. However poplar the idea might be, and however much donors might root or pine for it, glowing trees are a shady prospect at best.

Stick That in Your Socket

Glowing plants are but one example of a major shift underway in how we view illumination. As research continues to uncover how particular wavelengths of light can heal or affect depression, relaxation, concentration and even crime rates, industry has taken notice. Soon we will move beyond "Is it bright enough in here?" to buying household and work lights that can be adjusted at whim to achieve desired effects [sources: Barringer; The Yomiuri Shimbun].

Would you want to live in a world that looks like a Pandora knockoff, or blares like the wall decorations of a stoner crash pad? If you said yes, would your answer change once you realize there's probably no way to turn the trees off?

Some embrace glowing plants for their symbolic value. Trees are associated with knowledge, whether in a Biblical or Newtonian sense, as are various light sources (light bulbs, lanterns and torches spring to mind). But symbols cut both ways, and a glowing tree that doesn't work -- or worse, causes harm -- is another arrow in the quiver of those who see at least some science as frivolous and not worth the risks research sometimes poses.

Either way, the phrases "do-it-yourself biolab" and "mail-order DNA foundry" give me the willies.