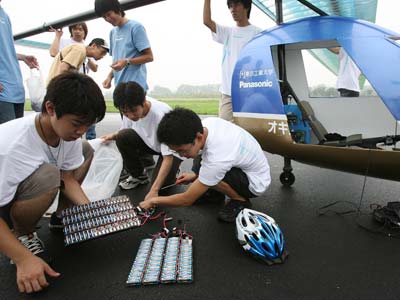 The pilot of the Oxyride Dry Cell Manned Aircraft checks 160 Oxyride batteries prior to the plane's first flight at the Honda Airport on July 16, 2006 in Saitama, Japan. The vehicle was the first manned aircraft powered exclusively by 160 AA batteries.
Koichi Kamoshida/Getty Images News/Getty Images

While the electric car still hasn't managed to surpass its gas-guzzling counterpart, its benefits continue to resonate with drivers around the world. Imagine tearing off along a scenic highway without the guilt of high carbon emissions or the financial sting of the last gas-up. How much quieter would the world be without the throttle and groan of countless smoke-spitting engines?

Inevitably, these innovations turn our eyes skyward. More than ever, the condensation trails of aerial traffic weave patterns through the sky, but just where are the electric aircraft? While you shouldn't expect to find a "flying electric" option at the airport anytime soon, electrically powered aircraft not only exist, but the technology continues to evolve at an encouraging rate.

Electric aircraft and electric cars share some of the same challenges. How do you produce the desired amount of power without a combustion engine? How do you avoid weighing the vehicle down with too many batteries? Then there's the whole issue of obtaining maximum mileage without trailing miles of power cord behind you. Take these concerns with you into the clouds and overcoming them often makes all the difference between soaring and plummeting.

Of course, one can fly just fine without a powered engine. Birds have been doing it for millions of years and the first human flight successes were all non-powered. Frenchmen Albert and Gaston Tissandier actually took the world's first electrically powered flight in 1883, aboard an airship of their own design.

Since then, various electric aircraft have graced designers' blueprints -- and plenty have actually taken to the sky. In this article, we'll look at the key approaches to powering an electric aircraft and find out where the technology is headed.

How to Fly the Electric Aircraft

Obviously, an electric aircraft needs juice if it's going to soar -- and that's the big challenge. How do you provide an airplane with enough electricity to power it without weighing it down too much? That's the real advantage of fuel: By and large, an electric battery just can't supply as much power as its weight in gasoline can produce. Still, it hasn't stopped designers from trying. These are the three basic varieties of electric aircraft:

Battery-powered: This design entails hooking the plane up with the appropriate supply of onboard battery power. In addition to playing a role in the first electrically powered flights of the late 19th century, batteries continue to power many of the radio-control planes used by hobbyists today. These two facts are not unrelated: It's much easier to use batteries in a tiny, unmanned plane or an airship elevated by hot air. As batteries introduce a great deal of weight to an aircraft, the reality of a piloted battery-powered airplane had to wait for fuel-cell technology to advance sufficiently. The first manned battery-powered flight took place on July 16, 2006, when students at Tokyo Institute of Technology launched a light plane powered by 160 AA batteries [source: BBC News].

Solar-powered: To deal with the problem of battery weight, designers in the 1970s took to the skies with solar power. These planes didn't rely solely on battery power, but instead used it in conjunction with the endlessly renewable resource of the sun. However, the amount of energy from solar radiation is still rather puny compared to a gallon of jet fuel, rendering solar aircraft both slow and light. The main upside is that they can, in theory, stay airborne for years at a time -- either as unmanned, low-flying satellites or tethered to the ground like kites. For more information, read How Solar Aircraft Work.

Wireless power transmission: Another method of delivering power to an electric aircraft is power beaming or wireless power transmission (WPT) This technology involves using either a ground-based laser or microwave emitter to send energy through the air to a receiver-equipped airplane. Microwave power transmission (MPT) was first used in 1964 to power a miniature helicopter -- and for a whopping 10 hours [source: Dickinson]. In 2002, NASA researchers successfully demonstrated the use of spotlights and laser beams to provide small, unmanned solar craft with necessary energy. While research into this technology continues, scientists believe it may one day allow solar-equipped aircraft to fly through the night in certain areas. For more information, read How Wireless Power Works.

While the notion of using wind power to charge an electric aircraft's batteries may sound a little silly at first, there are actually some sound theories regarding regenerative soaring. By this, an electric, propeller-driven plane would depend on updrafts and the momentum of the aircraft's final descent to spin its blades and generate electricity in the same way a wind turbine does.

The Near Future of Electric Aircraft 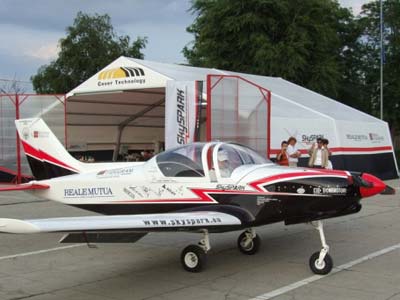 SkySpark's electric plane can reach speeds of 155 miles per hour (250 kilometers per hour) on a charge from its lithium polymer batteries -- a current world record.
Image Courtesy SkySpark

Developers around the world are currently working on innovations in electric aircraft design. Breakthroughs in fuel cell technology, engine and even propeller design continue to push the boundaries of what is possible with electric airpower. Here are a few examples of just what the future of flight might hold:

The Pipistrel Taurus Electro: This particular electric aircraft looks a lot like an ultralight glider, because that's basically what it is. The catch is that two lithium-polymer battery packs drive a top-mounted propeller with a 31-pound (14-kilogram), 30-killowatt electric motor. This allows the experimental craft to take off on its own rather than depend on another plane serving as a tug.

The Yuneec E430: China's Yuneec International hopes to be the first to offer a commercially available electric airplane. Its E430 plane seats two, reportedly charges in three hours and runs for two and half hours when fully charged -- all at a cost of $89,000 [source: Gizmag]. It depends on 159 pounds (72 killograms) of lithium polymer batteries. The company plans to begin sales in 2010.

The SkySpark: This 100-percent electric aircraft made headlines in June 2009 when it set the world air speed record for an all-electric airplane: 155 miles per hour (250 kilometers per hour). The plane is essentially a modified Pioneer Alpi 300, powered by a 75-kilowatt electric motor and a bank of lithium polymer batteries. The plane is the product of independent startup DigiSky and Turin Polytechnic University. For their next step, the developers plan to power the engine with hydrogen fuel cells.

As for future projects, the sky's the limit to what designers may attempt. For instance, Tesla Motors CEO Elon Musk boldly proposed the development of a supersonic electronic airplane at a 2009 summit. While this sort of technology is still quite a ways off, it certainly shows where battery power may take us.

Explore the links on the next page to learn even more about human flight and green technology.