Browse the article How EnviroGrid Works 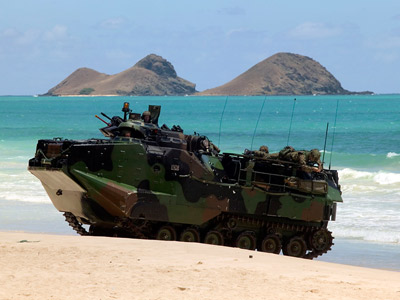 When a large amphibious assault vehicle rolls up on a beach, it's bound to displace a fair amount of sand.
Marco Garcia/Getty Images

Back in the 1970s, the U.S. military set about solving a long-standing problem in combat operations: the movement of the ground beneath heavy equipment. When tanks and supply trucks move around on unstable dirt and sand, especially on coastlines, displacement and erosion occur, which means even less stable ground to travel on.

The solution came in the form of a lightweight structure that held together loose sand, dirt or gravel so the ground stayed put. The trick was in the structure's honeycomb shape.

It's called cellular confinement, or geocells, and it's not just for the military. Products like EnviroGrid, one version of the geocell approach, have widespread civilian applications. Geocell technology holds together all sorts of ground structures, from flat land to 45-degree slopes and from arid ground to highly vegetated soil. It has applications in landscaping, civil engineering and environmental protection. You may have walked or driven on geocells without even knowing it.

In this article, we'll find out what cellular confinement does, how it's used and why it's better than some of the more common and traditional geological-stabilization techniques.

Most of us don't think much about geological stability, but it's a big issue in engineering and outdoor design. How do you build up a mound of dirt to make a hill on a golf course without it washing away in the first rain storm? How do you build a driveway on a base of mushy red clay? And how do you make sure the sloped sides of a highway don't wash out after 20 years of high winds?

You somehow secure all of these structures so they can bear weight and withstand the elements. Typically, this is done using concrete walls, or by layering geotextile fabric with compacted aggregate (like dirt and rocks), or building a raised bridge to bypass the problem entirely. EnviroGrid is an approach to accomplish the same end while working a bit more closely with the natural environment. 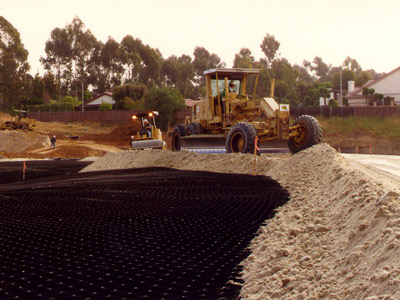 The honeycomb chambers of EnviroGrid are filled with sand.
Image courtesy of EPA

The concept behind cellular confinement is pretty straightforward: A walled cell will hold anything you put inside it. For instance, if you put sugar inside a cookie cutter, you can move the cookie cutter around without losing the sugar. By extension, a multitude of interconnected cookie cutters will hold a whole kitchen full of sugar, and it'll be even more stable because that huge structure will be much harder to destabilize. Switch out sugar with dirt, and you've got the basic idea behind EnviroGrid.

Of course it's a bit more complicated when you move past baking and into engineering applications. Geocells become, in a way, connected to the ground.

EnviroGrid is a flexible honeycomb structure. The honeycomb cells are open at the top and bottom. The sheet of cells is laid on and secured to any unstable surface, be it level or sloped. It can be used on sand, dirt, rocks, clay -- pretty much anything that might blow or wash away or give out under heavy loads.

The cells are then filled with some sort of aggregate, such as dirt, soil, pebbles or even concrete. It all depends on the application (which we'll get into on the next page). Since the cells are open on both sides, the unstable ground beneath the structure becomes mingled with the added aggregate, and the honeycombs become part of the ground surface. The walls of the cells protect the aggregate from the elements, so instead of wind or water blowing away the dirt, they pass over the tops of the cells. And the added strength of all of those interconnected cell walls multiplies the force the ground can withstand, because any force is spread out over a much larger surface area. The dirt can't be dispersed by the weight, because it can only move around within the confines of the cell.

There are a few particular advantages to using geocells instead of more traditional methods, including appearance, cost and environmental friendliness. You'll see why in the next sections, when we get into applications. 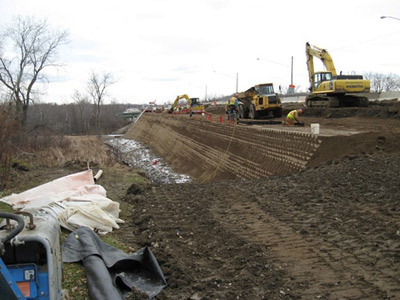 When engineers need to build a retaining wall to secure the sloping sides of a highway base, they might build a structure out of concrete that attaches to the slope using a grid that extends into the hillside. This process can be pretty expensive, mostly because the facing on that concrete, which makes the wall more appealing when you drive by it, can cost a lot. It's heavy, and it has to be shipped in. Plus, concrete often doesn't weather all that well.

EnviroGrid doesn't require an extension deep into the slope, so it can be easier to install. More importantly, it can be filled with aggregate already on site, so shipping costs are minimal. It's flexible, so the ground is secured in a more natural state. And because the open honeycomb structure allows for water flow and drainage, vegetation can compose the pretty top coat, instead of something like concrete.

Retaining walls, which are used not only for roadways but also in landscaping, landfills and all sorts of other civil engineering projects, are just one geocell application. Erosion control and ground stabilization are the other two primary uses for EnviroGrid.

Ground stabilization is the application the geocell approach was initially developed for, and it turns out civilians need stable ground as much as soldiers do. Laying a grid of geocells on unstable earth and filling it with dirt or rocks can create a stable foundation for a driveway, a park walkway or a hiking trail. It can make soft ground fully support foot traffic, a golf-cart path, a sewer system or train tracks without sinking in under the weight.

And securing the ground takes on a much "greener" bent when you get into erosion control. Applying the EnviroGrid framework to a stretch of land in danger of aridity from wind and water erosion, or a hillside that's getting steeper and steeper or a river bank that's disappearing into the river can stop and even reverse the erosive process. It's used a lot in parks and hiking areas to keep the land stable despite human use. The geocells hold the land in place to prevent further erosion, and you can fill the cells with new, seeded soil, which can both build up the land and promote re-vegetation to keep it that way.

The unique structure of the geocell makes it ideal for re-vegetation because it lets water flow freely, even between cells if the grid material is permeable. It's a very flexible technology, though. For a more heavy-duty wall against erosion, you can simply pour concrete into the cells.

For more information on EnviroGrid and related topics, look over the links on the next page.