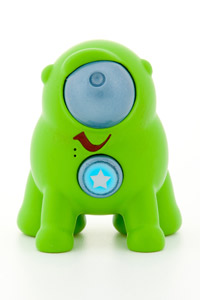 You can't buy this green Fastronaut just yet -- it's still a design.
Photo courtesy of Sara Fisher Paculdo/Photographer: Miguel Saldana

The Fastronaut characters can all talk. When enough energy has been generated in the dynamo, an LED lights up that tells kids they can press the speaker button to hear some astronaut talk. The rest of the fun stuff resides in the Fastronauts' rides.

The figures fit into two different space vehicles: The hand-rolled moon cruiser and the bike-speedometer rocket. The cruiser's dynamo spins with the vehicle's own wheels, while the rocket's dynamo spins with a front bike wheel. Each one generates "vroom" noises from a tail speaker and has LED tail lights. The rocket also has a speedometer and an odometer that tells kids how far and how fast they're biking.

The fact that all of this is powered by human energy, and not pair after pair of landfill-destined batteries, makes Fastronauts an eco-friendly toy. But aside from the kinetic-energy angle, there are some who question the overall Earth-friendly nature of the device. The biggest question has to do with the injection-molded plastic shell that makes the toy so cute. Plastic is not a terribly green substance. Still, the shell is recyclable, so as long as people dispose of Fastronauts properly after the kids get bored of them, at least the toys won't end up in the landfill.

Plus, the toy isn't even close to production yet. It's just a design. By the time a toy company decides to pick it up for production, "biodegradable plastics" could be a more common material for toys.

In any event, the toy's alternative-energy connection is certainly the big draw for the Greener Gadgets judges and for eco-minded parents. But Fastronauts do have benefits beyond the green. With childhood obesity becoming an increasingly serious health problem in the United States, any toy that runs on kids' motion is a welcome addition to the toy world.

For more information on Fastronauts, the Greener Gadgets Design Competition and related topics, look over the links below.