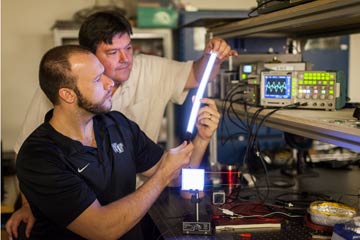 Companies sure love their fluorescent office lights; office workers, not as much. These lights may be more energy-efficient than conventional incandescent lights, but they tend to flicker, and give off a weird, unnatural yellow tint that some complain is hard on the eyes. Worse yet, they often emit a continuous buzzing sound, which can become so irksome and enervating that, at some point, you imagine yourself as the scientist who was accidentally transformed into a human-insect hybrid in the 1958 horror film "The Fly."

People have been putting up with the visual and aural shortcomings of fluorescent lights for more than 60 years, ever since fixtures using the technology started to become widespread after World War II. A 1947 article in Popular Mechanics magazine, for example, compared their sound to "a bee in flight in the quiet of a bedroom" and cautioned homeowners to install them in places such as attics and basements, where they wouldn't cause sleepers to toss and turn fitfully [source: Brown]. While more recent fluorescent tubes don't hum quite as much as their predecessors did, they still make enough noise to be bedeviling.

But there's a new bulb on the horizon, which lasts longer than a fluorescent light and is quiet; uses less energy than an incandescent bulb and or even a compact fluorescent light (CFL); and doesn't emit the bluish light of the CFL or the light emitting diode (LED) bulb. Researchers at Wake Forest University in North Carolina and Trinity College in Ireland have developed a new sort of light fixture based on field-induced polymer electroluminescent technology, also known as FIPEL. They're already working with a company called CeeLite to manufacture FIPEL lights and hope to have them on the consumer market by the end of 2013 [source: Neal, Spector]

In this article, we'll explain how FIPEL lighting works and why many are seeing it as a potentially enormous advance.