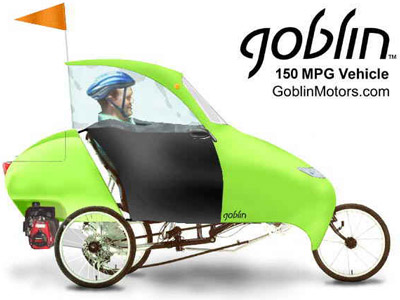 Dependence on fossil fuels to get where we need to go has become increasingly problematic, a trend reflected in the relatively newfound obsession with vehicle gas mileage. With a regular car or truck, you'll get anywhere from 10 to 30 miles per gallon (4 to 12 kilometers per liter), depending on model, engine and gas type. With a hybrid, you can probably pull up to 50 or even 60 miles per gallon (21 to 25 kilometers per liter) if you stick to flat highway and use efficient driving habits. And that's about as good as you're going to get with a mainstream gas-powered car.

But an interesting new alternative has popped up, one that can get up to 150 miles per gallon (63 kilometers per liter) under ideal conditions. In theory at least, you could drive a vehicle called the Goblin Aero from New York City to Los Angeles on 18 gallons (68 liters) of gas [source: Mapquest].

This is "in theory" because the Goblin Aero isn't exactly a car, and whether it's suited to a cross-country trip is somewhat dependent on the fitness level and adventurousness of the driver. Not to mention the highway laws along the way.

The Aero fits into a class of vehicle called velomobiles. It's one of the newest additions to the collection of available models, which are more popular in Europe than in the United States. But Goblin Motors has created a velomobile that may be particularly well-suited to the American market.

A velomobile is sort of a cross between a bicycle and a car. In this article, we'll check out the Goblin Aero velomobile and find out how it runs. We'll see how you drive one, where you can use it, and what kinds of benefits it provides over both a traditional car and a traditional bicycle.

So, how exactly do you cross a car with a bike? 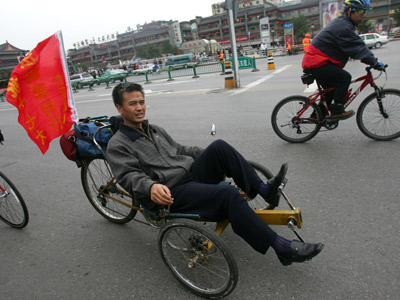 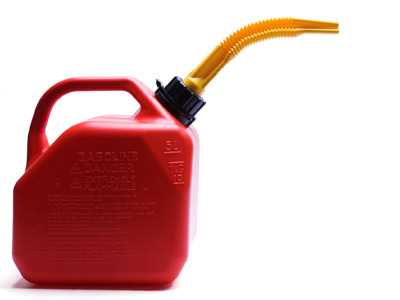 The Goblin will save you a lot of gas.
iStockphoto.com/vicm

It may seem ideal to take that cross-country trip from New York to L.A., but in practice, it would probably work out to a lot more than 18 gallons (68 liters) of gas. The Goblin Aero isn't built for highways -- it can't keep up with traffic. So unless a highway has a bike lane, you'd be relegated to the much more roundabout local streets.

In most cases, you also don't need a license to drive it, so someone who finds himself with a suspended license could still get to work without dealing with a bus schedule.

Still, those aren't the biggest reasons why someone buys an Aero. Much more central is the issue of health -- both personal and environmental. At 150 miles per gallon (63 kilometers per liter) and a 30-mile (48-kilometer) round-trip commute, someone could conceivably drive to and from work for one week on a single gallon of gas. That cuts the financial and environmental costs of commuting by two-thirds over something as environmentally friendly as a Prius.

And a Prius won't help your body at all. Riding a bike to work is a great activity for weight maintenance and cardiovascular fitness, and the velomobile's carlike enclosure makes it a much more viable option for many commuters. Plus, you can pick your lane -- car lane, bike lane or path. A Goblin Aero is legal to drive on bike paths that take you off the main road, so the driver can take a shortcut or the scenic route, too.

At a price ranging from $5,000 to $9,000 dollars depending on power (human, gas or electric) and body features, a Goblin Aero is going to cost you more than a typical bicycle but less than a typical car. For most people, it can't totally replace a car, since it's a one-seater. But if taking the low-emissions, high-health scenic route is important, a velomobile could prove to be a perfect second vehicle.

For more information on the Goblin Aero, velomobiles and related topics -- including how to buy one -- look over the links on the next page.