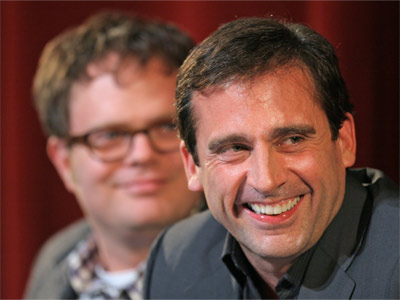 Michael Scott and Dwight Schrute (played by Steve Carell and Rainn Wilson) would probably love to sell you some high-yield paper. The two star in the U.S. version of "The Office," which revolves around the fictional paper company Dunder Mifflin.
Kevin Parry/WireImage/Getty Images

Someone alert Michael Scott: There may be a revolution in paper brewing. As we move to a supposedly paperless age, the old-fashioned stuff still has a role to play -- each year U.S. consumers use 1 trillion sheets of paper in printers and copiers -- but so do new types of paper, particularly those that can be friendlier to the environment [source: Xerox]. Enter high-yield paper, pioneered by Xerox and announced in July 2007.

The paper giant says that its high-yield paper, which spent 17 months in development and uses 50 percent fewer trees, is cheaper and greener [source: DM News]. Xerox calls it the "first mechanical fiber paper for digital printing" [source: Xerox]. The company also recommends the paper for business clients that do digital printing (fliers, brochures, catalogs, invoices or bills) or for conventional printing and sharing of documents in an office. This is the sort of paper that needs to be able to show fairly good quality images and text but isn't necessarily as pricey as premium paper. Xerox also says that the new, more eco-friendly paper is well-suited for "transactional printers" -- the large, expensive, high-speed, monochrome machines that are standard in many offices and coffee shops [source: Xerox].

At first only available for corporate clients, the paper is now widely available. A single carton of 5,000 sheets retails for $54 on the Xerox Web site. A similar carton of 20-pound multipurpose paper retails for $42.99 at Staples.com. When announcing the paper, Xerox said it was 5 percent cheaper than regular bond paper [source: NPR].

So is this paper actually a step in a new direction? Is the production process as environmentally progressive as Xerox claims it is? Should Dunder Mifflin start stocking it immediately? Let's take a look. 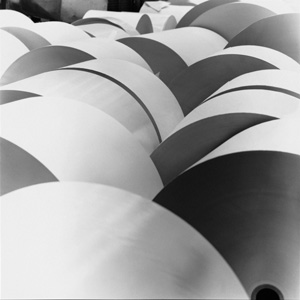 Before paper winds up as a random printout on your desk or wound around one of these giant rolls, it has to go through an extensive production process.
Kim Steele/Getty Images

High-yield paper uses 90 percent of a tree. That's a significant improvement over most digital printing papers, which often use only 45 percent of a tree [source: DM News]. Xerox achieved this dramatic boost in efficiency by using the wood's lignin, a dark-colored material that is removed from other types of paper.

In traditional paper production, wood fibers are separated in a chemical-rich solution. The white cellulose is then used to make the paper, and the rest of the wood (including the lignin) is burned for energy. But that method is inefficient, as less than half of the wood becomes paper [source: Xerox]. So with high-yield paper -- the term "high yield" comes from the fact that most of the tree is used -- the wood is mechanically ground into pulp.

High-yield paper production begins with the pulping process, where wood chips are poured into big grinders. These machines grind up the wood, freeing up wood fibers, but nothing is removed at this point. The pulpy wood is then mixed with a liquid. After that, the mixture is literally sprayed onto a conveyor belt. It's on this conveyor belt where the sprayed-on paper dries before being cut. No chemicals are used to bleach the paper to a brighter white.

To minimize the creation of dust from errant paper fibers, the paper's surface is treated at the mill. Dust buildup also can harm a printer, so the lack of dust may cut down on future repairs.

The use of mechanical pulping also means that less energy, water and chemicals are used in the production process, adding to the paper's green credentials. Relying on hydroelectric power to run the manufacturing plant cuts emissions by 75 percent, Xerox claims [source: The Paper Planet].

Now let's take a look at some of the pros and cons of high-yield paper.

Paper or paperlike materials can also be made out of fibers from plants such as cotton, hemp, switchgrass, kenaf, papyrus, mulberry, bamboo, flax, straw -- and, of course, recycled paper. 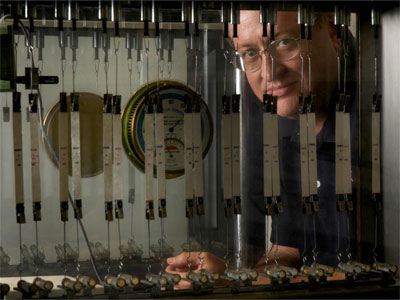 Besides its lower environmental footprint, high-yield paper has some other advantages over similar papers designed for digital printing. It doesn't produce dust or curl at the edges when exposed to the heat of printing, which has been a problem with mechanically pulped papers in the past. The lack of curling also reduces how often the paper may jam.

Heat plays an important part in printing since it helps to fuse the image to the paper. That heat also pushes moisture out of the paper, causing the paper to shrink ever so slightly. But in some other papers (and in previous attempts to create this kind of paper), the two sides of the paper shrank at different speeds, which caused the curling effect. Xerox scientists -- or paper technologists, as the company calls them -- overcame this problem by properly aligning the paper's cellulose fibers on both sides of the paper.

This paper is lightweight, which further cuts down on costs for consumers, as shipping it will be cheaper. Xerox also claims that the decreased weight allows it to include 10 more sheets per pound of paper [source: Gizmag].

But not all is cheers and celebrations with Xerox's baby. This paper is 20-pound paper, similar to standard printing paper, and like its peers in this category, material printed on one side is slightly visible on the other side, although the paper is considered suitable for double-sided printing.

Another potential disadvantage: Because it includes lignin, in addition to white cellulose, high-yield paper isn't as bright white as chemically bleached paper, although that may not be a concern for most users. On the 100-point brightness scale used for paper, it rates an 84. Papers designed for color printing usually have brightness ratings in the high 90s.

Because of the presence of lignin, high-yield paper doesn't retain its color for as long as conventional papers. Like old newsprint, which also contains lignin, it will eventually turn yellow.

Finally, this paper may not be as "green" as you might think. Aside from the obvious fact that it requires trees, the paper doesn't use recycled material, nor does it come from sustainable forests -- both of which are considered important standards for more environmentally responsible paper [source: NPR]. You are, of course, free to reuse or recycle your own paper. Most office supply stores also sell a variety of recycled paper or paper taken from sustainable forests.

For more information about different types of papers and similar topics, please look over the links on the next page.

Around 40 percent of printed documents in an office end up thrown away or recycled [source: CNET].