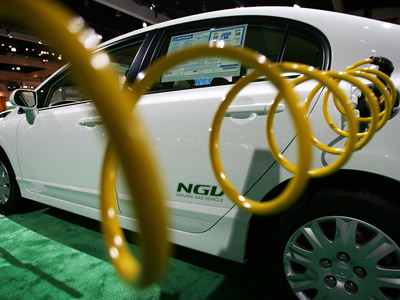 Chances are pretty good that if you've ridden a bus lately, you've ridden in a natural gas vehicle (NGV). NGVs don't run on the same fuel you get at the corner gas station. Instead they are powered with compressed natural gas (CNG), or sometimes liquefied natural gas (LNG), or a blend of hydrogen and CNG (HCNG).

CNG is primarily methane (CH4), not petroleum (like gasoline and diesel), and it's cheaper than both petroleum and hydrogen. While it's still a greenhouse gas (it's a carbon-emitting fossil fuel), it's considered cleaner than petroleum -- natural gas releases 30 to 40 percent less greenhouse gas emissions than gasoline [source: FuelEconomy.gov].

There are more than 8.7 million CNG-powered vehicles on the roads around the world today. In the United States, though, the numbers are small. Americans generally use natural gas to generate electricity and heat. While the average U.S. household owns 2.2 automobiles, there are only about 150,000 NGVs in the country and of those, a small fraction are passenger cars (most are fleet vehicles such as buses, taxis, delivery trucks and municipal vehicles) [sources: CNGnow and Mirhaydari]. Emissions from NGVs are less than 95 percent of that from gasoline or diesel vehicles [source: Natural Fuels Solutions].

While several automakers offer lines of CNG-powered vehicles for fleet use (for example, Ford manufactures CNG-powered Crown Victorias for taxis) and the world market is NGV-friendly, American consumers have little to choose from when considering a CNG-powered passenger car. You can either spend between $2,000 and $4,000 to convert your gasoline-powered car to CNG or consider purchasing the Honda CNG-powered Civic GX. To compliment the Civic GX, American Honda Motor also began selling a home refueling appliance (HRA) called Phill. Phill is designed for consumers to use in residential environments, either inside a garage or outdoors, for convenient fill-ups in a market with limited refueling stations.

Phill is an appliance that's mounted on the wall of a garage or carport and requires a standard residential natural gas supply and electric service (240 VAC / 60 HZ). HRAs should be professionally installed, and potential buyers should contact their local gas company before purchasing an HRA to be sure services are available. Some gas companies require a letter of installation intent. The Phill appliance costs about $3,500 plus an additional $1,000 to 2,000 for installation [source: Honda]. Owners are also eligible for a $1,000 federal tax credit as well as regional discounts and credits.

When in use, Phill consumes an estimated 800 watts of electricity, which is less than many coffeemakers or toasters [source: Natural Fuel Solutions]. It weighs about 100 pounds (45 kilograms) and is 30 inches by 14 inches by 14 inches (72 centimeters by 35.5 centimeters by 35.5 centimeters), about the size of a filing cabinet. At 45 dBA, it's quieter than a washing machine (60 dBA) or clothes dryer (65 dBA) [source: Noisy Planet]. Using Phill is simple: It has "start" and "stop" buttons, a hose and a nozzle. The nozzle snaps into place over the NGV's fuel tank opening, similar to filling a conventional car with gasoline. Phill automatically shuts off when the tank is full.

Although convenient, refueling with an HRA takes longer than gassing up at a public refueling station. Phill is a slow-fill compact natural gas compressor (as opposed to fast-fill public CNG stations) in addition to being a pump. Natural gas in residential lines is kept at low pressure, about 0.25 pounds per square inch (psi). CNG-powered vehicles, however, require 3,600 psi, and the HRA gradually increases the pressure to make up the difference. Owners can expect to refuel their NGV at a rate of 4 hours for every 50 miles (80 kilometers) driven [source: Natural Fuel Solutions].

Benefits of the Home Refueling Appliance 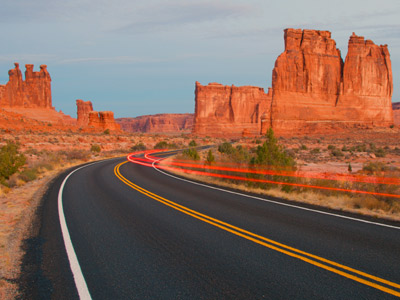 Hit the open road in your CNG-powered car, and you might just be out of luck.
iStockphoto.com/beklaus

CNG-powered cars only have a maximum driving range of about 170 miles (273 km) before needing to refuel, making the small number of CNG fueling stations across the United States -- roughly 1,600 stations, and not all of them open to the public -- hard to rely on. Some regions are better served than others, such as California, Utah and New York, but get into the heartland and may you find yourself out of luck.

With Phill installed at home, a CNG-powered car owner can expect to save money at the tank as well as help save greenhouse gas emissions -- all while never having to wait in line for a fill up. CNG sells for about 50-cents-a-gallon-equivalent less than gasoline from a public station. With an HRA, owners save even more: By hooking directly into the residential natural gas line, CNG typically costs around $1 a gallon (of course, costs depend on your local natural gas company's pricing).

Phill's built to last, too. It requires virtually no maintenance and is good for an estimated 6,000 hours of operation, after which it can be remanufactured up to three times (giving it a total life of 24,000 hours of use).

Concerns about the Home Refueling Appliance

While CNG may be safer for the environment than gasoline, is it really safe to have an HRA installed in your home? It's really no different than living with other natural gas home appliances, such as a hot water heater or clothes dryer. Phill is designed with a built-in sensor that shuts the system down if it detects a malfunction such as a methane leak or improper connection. Professional installation should comply with any applicable building codes and regulations, including venting indoor units to the outside.

In a study produced by the National Renewable Energy Laboratory (NREL), it was found that although new owners were most likely to (intentionally or unintentionally) misuse their HRA in the first year of installation, the overall use of the appliance is safe: You're 10 times more likely to be struck by lightning than to experience a safety incident resulting from normal use of Phill [source: National Renewable Energy Laboratory].

In addition to safety concerns, infrastructure is also a problem for HRAs. CNG is generally transported through a network of natural gas pipeline, not by truck or rail. Distribution infrastructure -- whether or not fuel is available where you live -- plays a big role in whether or not NGVs are successful. Even if consumers want cleaner cars, if they don't have easy access to fuel they won't bring one home. And even if you live where there is proper infrastructure in place, some natural gas suppliers place restrictions on installations -- so although it's a step toward greener transportation, be sure to do your homework before bringing Phill home.

The future of Phill is currently in flux, as its manufacturer FuelMaker Corporation went into bankruptcy in April 2009. Fuel Systems Solutions Inc., acquired FuelMaker assets including the Phill brand but availability and cost could be subject to change.

What Do Winemakers Do With Grape Waste?
Robotic Sorting Could Be the Efficient Future of Recycling
How Kill A Watt Works