How the Horizon H-racer Works 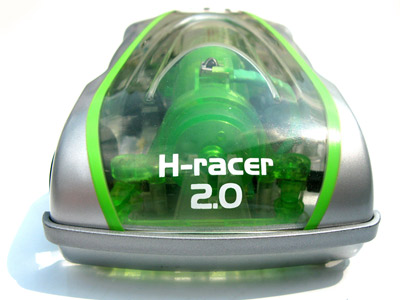 The H-racer glows in neon colors.
Photo courtesy of Horizon

Water electrolysis is basic science, and PEM fuel cells are nothing new. NASA's been using PEM fuel cells in space since at least the 1960s. If that alone were the solution to the energy crisis, we probably wouldn't be in a crisis in the first place.

But if a hydrogen-fueled auto industry is part of the solution to our current energy woes, then generating hydrogen power for a car the size of your hand is at least a step in the right direction. And while you can't just up-size the technology in H-racer and stick it in a Buick, it's probably a mistake to underestimate the value of an appealing toy that brings hydrogen power to the masses.

Horizon, the company that makes H-racer, is not a toy company. It's a hydrogen-power company that develops all types of fuel cells. H-racer is an attempt by the company to bring hydrogen power to the marketplace (and, perhaps, to make some extra cash while other, bigger applications are in development). The exposure and education value alone are a boon to the furtherance of a hydrogen agenda. Horizon has already sold tens of thousands of H-racers just in the United States, which means tens of thousands of kids and their parents are now able to use hydrogen power on a regular basis [source: Ji].

Are mass-produced automobiles and transit systems next? That's probably still at least a decade away, if not more [source: Ji]. But Horizon has other "in the meantime" plans besides H-racer: The company has shown off prototypes of fuel-cell powered motorbikes and golf carts, and plans to bring H-racer-type power to consumer electronics applications, like laptop batteries.

On the toy front, Horizon is also talking to major mainstream toy companies about incorporating its fuel cell into traditionally battery powered devices already popular with kids. If that happens, maybe hydrogen could become the next AA battery -- at least as far as kids are concerned.

For more information on H-racer, hydrogen power and related topics, look over the links below.