The development of agriculture has been essential to the rise of civilization. But in the 21st century, the ever-increasing need of Earth's growing population for food is one of the factors that has put our planet's environment in peril. Farming accounts for nearly a quarter of human emissions that are warming the atmosphere, and as much as half of that comes from plowing the soil to grow crops such as wheat, corn and soybeans, which releases carbon dioxide and the more potent greenhouses gases methane and nitrous oxide, the latter a byproduct of fertilizer use.

That's why researchers have been working on ways to reduce the harmful environmental effects of agriculture. One promising innovation is a grain with the trademarked name Kernza, which has a sweet, nutty taste and can be made into flour for use in bread, breakfast cereal and other foods, and also as an ingredient in products ranging from beer to ice cream. Unlike some more familiar grains, Kernza is a perennial grain, produced from plants that don't have to be replanted each year, so don't require annual tilling.

In addition, Kernza has a deep root system that reaches over 10 feet (over 3 meters) into the soil and may help to sequester, or capture, atmospheric carbon. And that root system also possibly might make it more resistant to the impact of drought related to climate change in some areas. After grain is harvested, fields planted with Kernza also can be used for foraging by livestock.

Comparison of wheat roots to those of Thinopyrum intermedium, or perennial wheatgrass, in four seasons.
Wikimedia Commons (CC BY 3.0)

The Role of The Land Institute

Kernza was developed by The Land Institute, a Salina, Kansas-based organization founded in 1976. Co-founder Wes Jackson "had this epiphany," explains Rachel Stroer, the institute's chief strategy officer. The big problem of modern agriculture, Jackson realized, was that it was wearing out the soil, by focusing upon monoculture — growing a single crop in a certain area — and relying upon annual crops.

"We've been using annual crops since the beginning of agriculture, 10,000 years ago, so that is not new," Stroer says. But as that practice intensified on modern farms, its destructive downsides became more and more evident, in the form of erosion, worn-out soil that required increasing amounts of fertilizer and polluted groundwater.

According to Stroer, Jackson saw the development of perennial grains to replace annual ones as a vital part of the solution to those problems.

The Challenge of Developing a New Food Crop

Developing new food crops is a difficult, time-intensive challenge. Back in 1983, scientists at the Rodale Institute, another research organization, identified a plant called intermediate wheatgrass (scientific name Thinopyrum intermedium), a species related to wheat, as a promising candidate that could be developed into a perennial grain. They worked with researchers from the U.S. Department of Agriculture to breed the plant and improve its fertility and seed size.

In 2003, The Land Institute began working on developing intermediate wheatgrass as well. With the effort guided by lead scientist Lee DeHaan, the institute has spent years breeding the plant to develop Kernza, the registered trade name for their variety. (Here's more on Kernza's origin story from the institute's website.)

In some ways, the process of developing a new crop hasn't changed much since prehistoric times. Basically, it involves breeding generation after generation of a plant, in an effort to promote whatever are the desirable characteristics that you're seeking. "You make a cross of two parents, and plant the babies, and see how they look," Stroer says. "The ones with the biggest seeds, you keep. And you do that year after year."

However, plant breeders have some tools that the ancients lacked. They've employed a process called molecular breeding, in which they use genetic analysis to determine the traits that the plant has, even before it grows to full size, to spot plants with the most potential for breeding.

"It's taken us 10,000 years and an intensified 200 years of modern breeding to get the crops we have today," Stroer says. In comparison, "It's taken 20 to get Kernza to where it is. It might take another 20 to get it to competing at scale with the annuals."

But in the effort to turn Kernza into a commercially viable crop, there's a lot of work ahead. Stroer says that researchers are now working to increase the size and number of the seeds produced by each Kernza plant, and to increase the height of the plants.

One drawback of Kernza is that unlike conventional wheat, it doesn't yet lend itself to free threshing, in which the edible grain is easily loosened from the plant, and instead requires another step called dehulling to remove the skin of the seed before it can be turned into flour, according to Stroer.

"Harvesting grain from Kernza can also be more challenging than annual grains like wheat because Kernza stems stay green after the grain matures, whereas wheat stems fully senesce [or grow old and wither] and pass through combines more easily," says Matt Ryan, an associate professor of soil and crop sciences at Cornell University and co-author of this 2018 Bioscience article on Kernza cultivation methods, via email.

In addition to breeding Kernza to make it suitable for free threshing in the future, scientists are working to make the yield produced by Kernza farms match what they've been able to achieve on their research plots. To that end, they're gathering data from farmers to help figure out how to time the Kernza harvest, what settings would be optimal for combines, and other factors that might make the fields more productive. Already, Kernza is being grown on 2,025 acres (819 hectares) in 15 states and more than 100 farmers and 53 different research partners from various institutions are working on the effort.

Researchers also are working with bakers, chefs, brewers and distillers to develop products that utilize Kernza, to help create a future market for it. One product already on the market is Long Root Pale Ale, whose maker, Patagonia Provisions, cites Kernza's environmental positives in its marketing.

"I've been working with Kernza for 10 years and it's been a fun adventure," Steve Culman, an assistant professor in the school of environment and natural resources at Ohio State University, and one of Ryan's co-authors, says via email. "I think one of the things that I've really come to appreciate is that successfully domesticating and developing a new crop requires more work than anyone can really appreciate. It's a major collaborative effort that really does require many people working together — scientists of many disciplines, food chain actors and a consumer market that is ready for and wants it. It's a pretty daunting task, but also what makes it so much fun to be a part of it."

The institute's Kernza program is just part of a larger effort to develop perennial crops that could someday replace conventional annual ones. Also in the works are perennial wheat, sorghum, legumes and oilseed. The institute has helped launch and fund a program in China's Yunnan province to develop a perennial version of rice.

"The ultimate goal is audacious certainly, but it is to replace annuals with perennials globally," Stroer says.

Last year, General Mills' Cascadian Farms brand produced a limited-edition Honey Toasted Kernza cereal, which it sold to raise funds for researchers. "We are hopeful that the harvest this year will yield a higher volume such that we can create a cereal that can be more widely available," a General Mills spokesperson says via email. 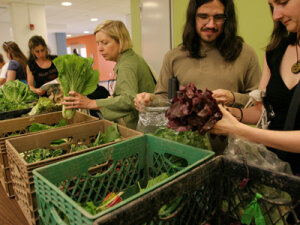 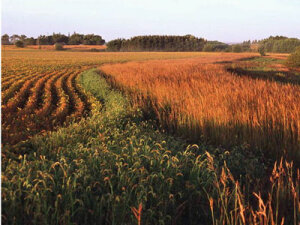 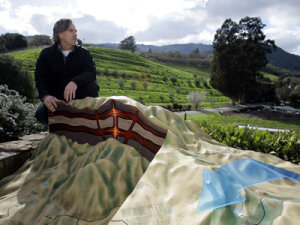