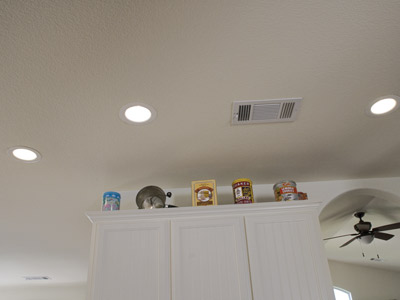 LEDs are poised to take over household lighting. Or so believe lots of research scientists  and some big lighting companies. Philips, for one, has stopped putting money into research and development of fluorescent technologies and is now putting all of its energy into LEDs [source: Taub]. General Electric devotes half its R&D budget to solid-state lighting [source: GE].

If you look at what the scientists are saying about LEDs, the picture does look pretty rosy. Breakthroughs are popping up at a breakneck pace. Two recent developments are predicting a major price reduction in the high-efficiency, long-lasting bulbs.

One has to do with the light-loss issue in bulb design. One way to release more of an LED's light is to put microscopic holes in the casing. The problem is that making all of those holes is time-consuming and expensive. A team of researchers at the University of Glasgow in Scotland has found a new way to do it, though. They've found that using a nano-imprint lithography technique can reduce the time and expense of putting billions of holes in tiny LEDs.

Another team of scientists, this one at the University of Cambridge in England, approached the issue from the supply side. They've found a new, less-expensive way to create gallium-nitride semiconductor material, a common basis of LED lighting. At present, gallium-nitride semiconductors are grown on expensive sapphire wafers. The new way uses silicon wafers and affects a dramatic reduction in manufacturing cost for the LEDs.

And what's more, these new gallium-nitride-based bulbs are rated at 100,000 hours, are three times more efficient than CFLs, and should cost less than $3 a piece [source: Evans]. Gallium-nitride LED light bulbs could be on the market by 2012.

The lighting industry in general expects LED costs to come down quickly. Lighting Science Group, a company that develops and manufactures LED lighting, estimates a 50 percent price reduction within two years [source: Linden]. Businesses, which have much more extreme lighting expenses and so can recoup upfront bulb expenditures very quickly, will likely flock to LEDs with that kind of price drop. However, homeowners may wait until the bulbs hit the $3 mark the Cambridge researchers are aiming for.

For more information about LED light bulbs and related topics, look over the links below.