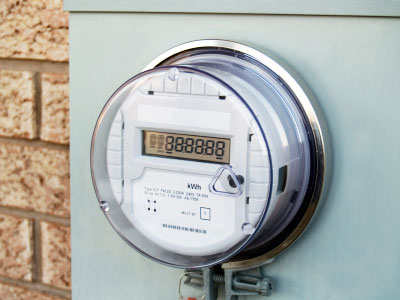 Reducing home-energy consumption can be accomplished many ways. Good insulation, double-paned glass, weather-stripping and similar efforts can improve your home's ability to retain hot or cold air. Some homeowners choose to install solar panels or to simply lessen their energy use, for example by foregoing air conditioning or by turning off computers when they're not needed. But as part of managing your energy use, it's important to know how much electricity you're actually using, and your monthly electric bill may not tell the full story.

The federal stimulus package included money for the installation of 40 million smart meters in homes. Besides the stimulus funding, smart meters are becoming an increasingly popular tool for consumers and utilities to work together to reduce energy consumption. (Although, as of mid-2009, only around 6 percent of American homes had smart meters installed [source: Fehrenbacher].)

For about $200, you can get a smart meter that will provide you with much more information about your electrical usage than a standard mechanical meter [source: Wald]. This data -- which may provide breakdowns of usage and rates down to the hour or even the minute -- has the potential to be useful for consumers and utilities alike. Consequently, many third-party companies are stepping forward to provide computer programs and devices that work with smart meters. Some of these programs allow you to receive text messages with information and others can provide a breakdown of how much electricity each appliance consumes.

By having easy access to these detailed reports, you can see if appliances that you run periodically -- such as a dishwasher or clothes dryer -- should be run less frequently or only when they're full. You may also find out if a device is malfunctioning, using more energy than it should. You might learn that it's actually cheaper to run some devices at night when electricity rates are often lower.

On the next page, we'll learn more about how consumers can better monitor their home-energy consumption and take a more proactive role in reducing energy use. 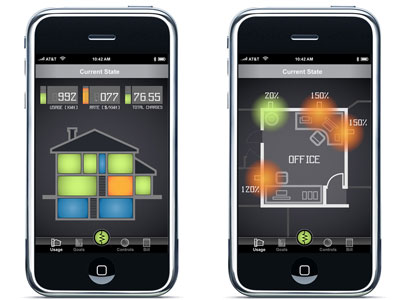 Current State is an iPhone application, currently in the concept stage, that would allow for a variety of remote energy monitoring and management capabilities, including turning home appliances on or off through your iPhone.
Finn McKenty / Kaleidoscope

Some energy-management and monitoring devices may only be available through your utility company. But as long as you have a smart meter -- or are able to get one installed -- you should be able to choose from a variety of products to monitor your energy use remotely. Still, there are few products at this time that allow for true mobile home energy management -- such as turning on and off appliances or scheduling when your AC will run using just your cell phone. With the spread of smart meters and the development of the so-called smart grid, that's expected to change, but for now, we'll look at a mix of monitoring and management possibilities.

Tendril mostly works directly with utilities, selling its products through them, so it's unlikely that as a consumer you'll be able to deal directly with them. But your utility provider may decide to partner with Tendril, meaning that when looking at taking advantage of your smart meter, Tendril may be an option for you.

Tendril makes thermostat-sized digital displays (and actual thermostats) that use ZigBee routers to communicate with a smart meter. (ZigBee is a wireless-network standard popular with home automation solutions.) Among Tendril's other products is one called the Volt, a ZigBee-enabled electrical outlet that plugs into a standard outlet. After plugging an appliance into the Volt, you can monitor the device's electrical usage on your computer or other Tendril device.

With a Tendril device installed, you can also go online and survey a variety of information, presented in figures and various graphs, to track your energy usage. With your Tendril device, you can learn about changing electricity rates and your home consumption, down to the hour. You can sign up for text messages that provide you with information about your energy usage, and you can compare your house's energy consumption to people of the same demographic.

Whenever Google enters a new field, people pay attention, and so it has been with the Google PowerMeter. This iGoogle gadget, or "widget," is similar to products put out by Tendril and other companies, offering in-depth utility data. Currently in a testing phase with utility companies, Google promises that PowerMeter will be available to consumers in late 2009 [source: Google]. Google.org features positive testimonials from some Google employees who have been allowed to beta-test PowerMeter. One Googler who tried PowerMeter learned that her apartment's electrical meter was incorrectly connected to the apartment building's washer and dryer, causing her to be charged for all of the electricity those appliances used [source: Google].

Besides Tendril, Google and similar products (such as those offered by Greenbox and Comverge), consider SunPower's iPhone application, which allows users to monitor their solar panels' energy production from anywhere. Of course, the system only works if the solar panels are provided by SunPower. There's also Control4's Mobile Navigator License, which is one of the few iPhone applications that actually allows you to control devices in your home -- from lights to thermostat controls -- through the phone and may serve as a model for future mobile energy management solutions. Finally, a company called GainSpan, in partnership with Our Home Spaces, has developed an iPhone app to control any home device that's WiFi-connected, including thermostats, water heaters and lighting. 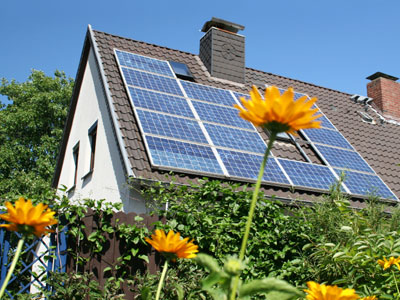 Some solar companies, like SunPower, offer iPhone or Web-based applications that provide graphs and charts that break down your solar panels' energy production.
© iStockphoto.com/AndreasWeber

The main supposition behind these energy-management and monitoring systems is that seeing a more direct relationship between flicking a switch and energy usage may cause people to be more conservative in their energy use. Consumers will also be more inclined to find ways to improve the efficiency of existing appliances or heating and air conditioning systems. On its PowerMeter Web site, Google states that studies indicate people can save between 5 and 15 percent on monthly bills simply by having access to their household's energy information [source: Google].

Some consumers have even been filled with a sense of competition, comparing their energy savings with that of friends or neighbors posted on utility companies' Web sites. Utilities and providers of energy-management systems generally offer information about how to be more energy efficient, such as by covering a hot-water heater with insulation [source: Shogren]. Following these tips can yield even greater savings.

In the future, communication between power companies and users is expected to increase, making for a more collaborative relationship. If you turn on your pool heater, for example, you may receive an e-mail or text message from your utility provider reminding you that it would be cheaper to run that heater later in the day. Similarly, some utilities are already offering variable pricing depending on the time of day -- energy-production costs oscillate throughout the day for electrical companies -- and pairing this variable pricing with smart meters, Web-based energy monitors and the like.

These tools should only become more useful in the future, as efforts at establishing a national smart grid take off and electricity providers begin providing more data -- and possibly in a standardized format -- to customers, as advocated by Google [source: St. John]. There remain some divisions about whether utilities will agree on one method for communicating data through smart meters. There's also some debate about what sort of wireless standard to use, with ZigBee and RF mesh being popular in the United States and Canada [source: St. John]. For now, at least, there are many competing standards for how these programs and devices operate, and utility companies appear reluctant to open up their data to third-party developers [source: St. John].

For more information about conserving energy at home and other related topics, look over the links on the next page.

Money to Be Had