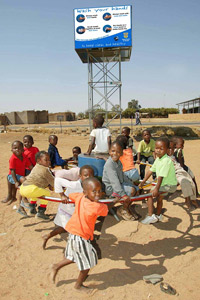 The PlayPump is a merry-go-round attached to a water pump.
Photo courtesy of PlayPumps International

Turning on the tap to get a cool glass of water or run a bath is something most Americans take for granted. Yet in sub-Saharan Africa and other underdeveloped countries around the world, getting water is a chore -- and finding uncontaminated water can be nearly impossible. According to the United Nations, more than 4,000 children die every day because they don't have clean water to drink [source: Frontline].

In the late 1980s, a billboard advertising executive named Trevor Field recognized the need for clean water and discovered a unique solution to make it happen. While Field was visiting South Africa, he came across an invention that combined a child's merry-go-round attached to a pump. The idea was that as the children played, the pump would bring fresh water up from the ground. Field and two colleagues licensed the invention and took its design even further, adding a large water storage tank and billboards to hold advertising and public service announcements.

Their creation was called PlayPump. In 1994, the first two of these devices were installed in South Africa's Masinga district. The idea gained momentum in 1999, when South African President Nelson Mandela attended the opening of a new school where a PlayPump had been installed. The story made headlines, and by the end of 2005, nearly 700 PlayPumps had been installed all over South Africa.

The following year, first lady Laura Bush and former President Bill Clinton announced a $16.4 million grant to build additional PlayPumps in South African communities. The grant was to be funded by a collaborative effort between the U.S. government and private charities.

PlayPumps International and its partners intend to install 4,000 PlayPump water systems in 10 sub-Saharan African countries by the year 2010. Together, these systems will bring clean drinking water to as many as 10 million people [source: PlayPumps International]. The company's next goal is to bring PlayPump to other countries in need of clean water.