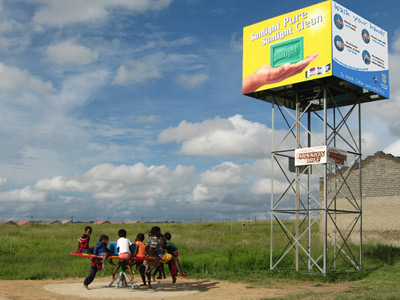 PlayPump could potentially bring water to millions of people in areas where clean water is now scarce. With a simple turn of the tap, it provides people in towns and villages with the water they need to stay hydrated and clean.

Today in Africa, women and young girls can spend as much as five hours each day collecting water from faraway pumps. They often have to walk for miles lugging containers that can weigh up to 40 pounds (18 kilograms). These containers are heavy enough to cause injury. With PlayPump, people have access to a central tap right near where they live, work and go to school. Women and girls do not have to trudge long distances each day to fetch water. Instead, girls have time to get an education. Women have more time to care for their families and hold more meaningful jobs.

Thanks to its unique design, PlayPump also provides play time. For many children in underdeveloped countries, it is the first piece of play equipment they've ever seen or used. Because PlayPump systems are often installed near schools, children have both a place to play and a source of hydration.

Even the billboards that flank PlayPumps have significan applications since two of the four help pay for the system's upkeep while the other two hold important public messages. Many of those messages, which are created in cooperation with PlayPump partners such as Save the Children, teach residents about AIDS prevention. This is a crucial message, considering that more than 22 million people in sub-Saharan Africa are currently infected with HIV [source: Avert].

Between the positive messages, the clean water supply and the simple fun, PlayPumps seem poised to influence the future of water delivery.

In the next section you'll find much more information on PlayPump.