Over the past few years, you've probably seen news stories with dire warnings about avian flu, or bird flu. It's a highly infectious disease that has swept through bird populations in many parts of the world. In October 2005, the disease reached Eastern Europe, most likely through migratory birds. It continued to spread through Europe, and in February 2006 it moved into Africa. Although the virus doesn't infect humans easily, more than half of the people who have contracted it have died.

But what exactly is bird flu? How is it different from the seasonal flu that people experience every year? How does it threaten people? What are governments doing to stop its spread?

In this article, we'll review the basics of how viruses and influenza work, and we'll learn the answers to these and other questions about avian flu, including whether it is likely to cause a global flu epidemic.

Viruses and Influenza: An Overview

A virus particle -- or virion -- is a microscopic packet that contains genetic material wrapped in a layer of protein. Some viruses also have a lipid membrane around the protein coat. Unlike bacteria, they cannot reproduce on their own -- they have to invade host cells. This process destroys cells and makes people sick.

Viruses usually enter the bodies of animals and people through their mouths, mucus membranes or breaks in the skin. Then, they infect specific cells. For example, common cold viruses attack cells in the respiratory system. As they reproduce, they destroy their host cells, releasing copies of the virus to attack other cells. Some viruses are more stable than others, but in general they mutate frequently, sometimes making it difficult for doctors to treat them.

Influenza is a specific type of virus that attacks the respiratory system. It can cause fevers, sore throats and congestion. If it attacks muscle cells, it can also cause muscle aches.

There are three types of influenza virus -- types A, B and C. Multiple subtypes exist within those types, and multiple strains exist within each subtype. Like many viruses, influenza can mutate through antigenic drift (small changes that occur as it reproduces) or antigenic shift (major changes that create a new subtype of the virus).

The influenza virus has eight gene segments. When two different types of influenza encounter each other, they can swap segments of their DNA. This can lead to new strains of the virus, some of which can be especially deadly. In fact, scientists believe that the two most recent flu pandemics occurred after human strains of influenza acquired genes from an avian flu virus.

Next, we'll look the strains of influenza that birds carry.

According to the United States Center for Disease Control and Prevention (CDC), birds carry every known subtype of influenza A. When scientists talk about avian flu, however, they usually mean varieties that exist mostly or entirely in birds -- not in people. Most of the time, birds can't transmit the flu directly to people. They first infect pigs and other animals that can contract both human and avian flu strains. When the strains come into contact with one another, they create a new strain that infects humans.

Many wild birds carry avian flu in their intestines and shed the virus in their droppings, but they don't usually get sick from it. Domesticated birds, however, can get sick when they come into contact with contaminated water, feed or soil. Birds spread the disease to each other through their saliva, respiratory secretions and droppings.

Poultry farmers can protect their birds from avian flu by following biosecurity practices. In an effort to slow the spread of various strains of avian flu, farmers disinfect their clothing and shoes as well as their farm equipment. They also quarantine birds that may be infected and keep domestic birds away from wild birds.

Farmers aren't just protecting their birds or their livelihood -- they're also protecting human health. In rare cases, avian flu can spread to humans. People have no immunity to avian strains of flu, so these viruses can be especially deadly. In the next section, we'll look at avian flu H5N1, the high pathogenic virus that has made the headlines by infecting and killing people in Turkey and Southeast Asia.

Subtypes of influenza A are named for surface proteins called hemagglutinin (HA) and neuraminidase (NA). There are 16 HA subtypes and 9 NA subtypes. That's why influenza A viruses have names like: 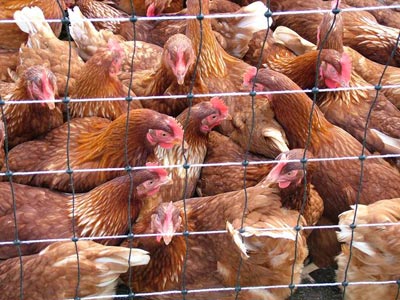 In 1997, health officials in Hong Kong reported a virulent strain of avian flu. For the first time, it appeared that the virus moved directly from birds to people instead of moving through a second species. The virus caused typical flu symptoms, and it also lead to eye infections, pneumonia and acute respiratory distress. Tests confirmed that this strain of the virus, influenza A H5N1, was completely new to humans.

Eighteen people infected with the virus were hospitalized, and six of them died. The Hong Kong government, alarmed at the potential threat of a pandemic, took drastic steps. In about three days, the government destroyed about 1.5 million birds, the country's entire poultry population. Although this measure sounds extreme, many health experts believe that Hong Kong's actions prevented an influenza pandemic.

Photo courtesy MorgueFile Ducks can be asymptomatic carriers of the H5N1 virus.

The H5N1 influenza strain appeared to lay dormant until 2003. Then, government officials in Vietnam and Thailand began to report infections in people and birds. Relatively few people contracted the illness, and most who did had extended direct contact with infected birds. In December of 2004, the disease spread to people in Indonesia and Cambodia. About half of the people who contracted the virus died.

At the same time, agriculture officials reported extensive infections in domestic birds. Approximately 100 million birds died in Asia in 2003 and early 2004, either as a result of the disease or as part of efforts to stop its spread. Major outbreaks continue to occur throughout several Asian countries. In October of 2005, the disease spread to Eastern Europe, likely due to migrating birds. By the following January, several people in Turkey had contracted the disease, most likely from contact with dead birds. Health officials found Nigerian birds infected with the disease in February of 2006.

As of October of 2005, the disease is endemic in Cambodia, China, Indonesia, Thailand and Vietnam [Source: CDC]. Visitors to any of these areas should avoid contact with wild or domestic birds and should stay away from poultry farms and open-air markets that sell live poultry.

Some people wonder whether scientists are overreacting to bird flu. After all, the virus has infected under 200 people, as compared to millions of birds. It also can't easily move from birds to people, and it's even less able to move from person to person. But public health officials have several concerns about avian flu:

Right now, avian flu H5N1 is most threatening to birds, especially in Asia. The biggest threat to human health and potential for the spread of the disease is also in Asia, where many rural families have at least a few chickens that typically roam free instead of living in an enclosure. But health officials report that the disease has gotten hardier and more infectious, and they worry that it may mutate and become a bigger threat to people.

If the virus gained the ability to infect people more easily and to move from person to person, it could cause a pandemic -- a global epidemic. Scientists warn that a flu pandemic is inevitable and that the world is unprepared for one. No one can predict when a pandemic might strike or whether influenza H5N1 will be the cause.

Health officials in the United States, Europe and other Western countries are assisting Asian nations in managing avian flu and are working to keep the disease from spreading further. The steps that they're taking to try to avoid a pandemic include:

Many countries also have plans in place for isolating infected travelers and quarantining anyone who has traveled with them. Response plans also outline how to limit the spread of the disease if a pandemic occurs.

Check out the links on the next page for more information about avian influenza and flu pandemics.

The 1918 Flu Pandemic and Bird Flu from Eating Chicken

A lot of people wonder whether the spread of bird flu means that they should stop eating chicken. The short answer is no. Thorough cooking kills the flu virus as well as any bacteria (like salmonella) that could be lurking in your chicken.

However, you should continue to follow standard preparation procedures when handling raw chicken. Kitchen tools and surfaces used to prepare chicken prior to cooking should always be thoroughly disinfected. Cutting boards used for raw chicken should not be used for preparation of vegetables or other foods to be eaten raw.