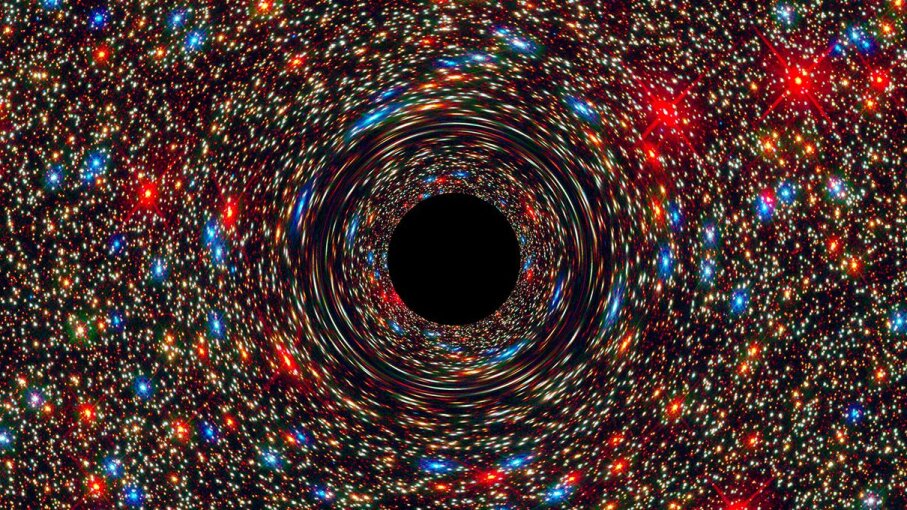 This image of a supermassive black hole is computer-simulated. By the end of 2017, the Event Horizon Telescope is aiming to show the world, for the first time, the bright ring of a black hole's event horizon. NASA, ESA, and D. Coe, J. Anderson, and R. van der Marel (STScI)

A telescope as big as our planet has begun the monumental task of observing the behemoth black hole at the center of our galaxy. The supermassive black hole is called Sagittarius A*, and it lurks in the Milky Way's core approximately 26,000 light-years from Earth.

The indirect clues to Sagittarius A*'s existence are strong, but we have yet to directly "see" it. This is because, despite its size, the black hole is very far away and well beyond the resolving capability of our best telescopes.

To directly image this cosmic monster, the world's most powerful radio telescopes have joined forces to observe Sagittarius A*, creating a huge "virtual telescope" that's as wide as our planet. This project is called the Event Horizon Telescope (EHT) and, after years of planning, it has finally begun observing Sagittarius A*. It also will be checking out the supermassive black hole of M87, a galaxy in the center of the massive Virgo galactic cluster.

"This week heralds an exciting and challenging endeavor for astronomy," France Córdova, the director of the National Science Foundation (NSF), said in a statement on April 5. "Radio telescopes from around the world ... will work in concert to test some of physics' most fundamental theories."

Black holes reign as the most perplexing and exotic objects in our universe. In these regions of space "everyday" physics do not apply, and Einstein's theory of general relativity dominates.

Supermassive black holes like Sagittarius A* and M87 are known to occupy the core of most galaxies. These massive objects can be millions to billions the mass of our sun and appear to be as ancient as the galaxies themselves. They have an intimate relationship with their galactic hosts and the power to trigger star birth. Conversely, they also can abort a galaxy's ability to produce any stars. These complex relationships between black hole and galaxy encompass some of the biggest questions hanging over modern cosmology.

General relativity predicts that the black hole's shadow should be circular (middle), but a black hole could potentially also have a prolate (left) or oblate (right) shadow. EHT observations will test whether these predictions hold true.
D. Psaltis and A. Broderick

To understand these objects at the heart of many galaxies, we need to get a good look at them. But to photograph Sagittarius A*'s event horizon – the region surrounding a black hole where not even light can escape a black hole's gravity – we need a technique that combines the power of many different telescopes.

"The key invention in a telescope is the 'focusing element,'" says theoretical astrophysicist Avery E. Broderick, who is an associate professor at the University of Waterloo and faculty member of the Perimeter Institute of Theoretical Physics in Ontario, Canada. "Galileo utilized the property of lenses; modern telescopes use mirrors. The focusing element takes all of the light that is spread out across the aperture of the telescope and brings it back to a single location in focus."

The bigger the telescope's aperture, the more light is collected and therefore the dimmer and more distant the objects in the night sky that can be imaged. With the technique of very long baseline interferometry, astronomers can hook up radio telescopes, distant from one another in different countries and on continents, to mimic a single "virtual" telescope with an aperture as wide as Earth.

"We record the electromagnetic waves at the individual [radio telescope] stations," continues Broderick. "Then we bring the data back to a central location and on a computer – known as a correlator – and delay how long it would take for that light to get back to the prime focus at the right time.

"The further the baselines [distance between observatories] are from one another, the smaller the angular scale we get to see."

The angular size of an astronomical object is its apparent size in the sky from our perspective. The farther away an object is, the smaller its angular size. By combining many different radio telescopes, very long baseline interferometry can allow astronomers to see smaller angular scales and therefore image very distant objects that we wouldn't otherwise be able to see. And the angular scale of the EHT is astonishing; it will have the power to resolve something the size of a grape lying on the surface of the moon. This means that the distant Sagittarius A* is still well within the EHT's resolving abilities.

It's totally within the realms of possibility that we could see something totally different – and that's probably the most exciting possibility.
Avery E. Broderick, Theoretical Astrophysicist and Associate Professor, University of Waterloo

Combining and correlating the signals from individual observatories from around the globe – some with baselines of more than 12,000 miles (19,312 kilometers) – is no easy task. But once this is achieved, EHT astronomers expect to be able to resolve an image of Sagittarius A*'s shadow and see small-scale structures surrounding the black hole, confirming some of the most extreme theories for physics in this strong gravity environment and, perhaps, revealing some surprises along the way.

"Sagittarius A* will become a laboratory for us to understand how these behemoths grew," says Broderick.

Black holes are well known as ferocious eaters. Their incredible gravities attract local material – dust, gas and stars – which is then violently energized and heated into a disk of swirling, hot gas. Then, over time, some of this material gets slurped down by the black hole, boosting its mass. However, as we haven't been able to directly see what's happening close to the black hole's event horizon, how this accretion works has been a mystery.

Though Sagittarius A* is certainly the closest (and most well-known) supermassive black hole to Earth, it's only half the story.

"There are two (radio) sources that are on the docket this year – there's Sagittarius A* and there's also M87," says Broderick. And M87's black hole is very different from Sagittarius A*.

Although M87 is around 2,000 times farther away from Earth than Sagittarius A*, it's more than 2,000 times more massive, so it will appear in the sky to the EHT as approximately the same angular size. What's more, this black hole is known to be extremely active, blasting out gases into space at almost the speed of light. How these jets are formed are a mystery – after all, black holes are more well-known for consuming matter, not spitting it back out into space!

Astronomers therefore have an incredible opportunity to study two black holes this year, one in the Milky Way and the other in a far-off galaxy, giving astronomers an unprecedented view of two very different objects.

"It's a voyage of exploration, you never REALLY know what you're going to see, that's what makes it exciting," Broderick tells HowStuffWorks. "We think we have ideas and I've spent a lot of time developing models for the EHT ... and figure out what we can and cannot determine. But it's totally within the realms of possibility that we could see something totally different – and that's probably the most exciting possibility."

Now That's Awesome
So, when will the world see the historic first image of a black hole? We'll need to be patient. It probably won't be until July that a picture will start to form, and it will likely be the end of 2017 that we'll see, for the first time, the bright ring of a black hole's event horizon.