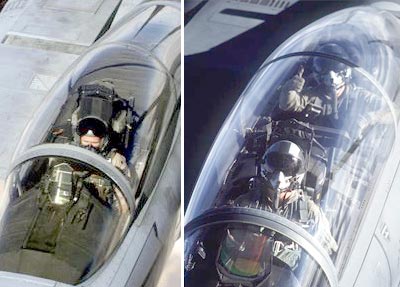 The cockpit in the F-15 Strike Eagle (on the right) has an extra station for the weapons systems officer.
Photo courtesy U.S. Department of Defense

The pilot's controls are also fairly straightforward. The pilot steers the plane with a control stick located in the center of the cockpit, and controls the engine with the throttle on his or her left. Both controls have several buttons and switches that operate the radar equipment, select options on the heads-up display, and target and fire the weapons.

The controls are designed with the hands-on throttle and stick (HOTAS) system. In the HOTAS system, every switch and button on the controls has a different shape and texture. This way, the pilot can control all the major aspects of the plane without ever looking down into the cockpit.

The WSO, by contrast, doesn't spend much time looking outside the cockpit. He or she monitors radar, LANTIRN and flight data on four multi-function displays (MFD) -- cathode ray tube monitors surrounded by buttons (sort of like the display on an automatic teller machine). The WSO position has a full set of flight controls, but this is only a back-up provision -- normally, the WSO doesn't help fly the plane. Both the pilot and the WSO sit in high-tech ACES II ejection seats, which launch them clear of the plane in an emergency.

All of this expensive equipment serves one basic purpose: It is designed to deliver various missiles, bombs and bullets, known in military circles as ordnance, to enemy targets. In the next section, we'll find out what the F-15 is actually packing when it goes to war.

The F-15 Eagle is loaded up with weaponry that can take out almost every aircraft in existence. It sports eight air-to-air missiles of different designs. It can carry various combinations of AIM-120 advanced medium range air-to-air missiles (AMRAAMs), AIM-9L/M Sidewinder missiles, or AIM-7F/M Sparrow missiles.

All three missile types are designed to actively seek out their target. The AMRAAM and Sparrow missiles are both radar-guided. The AMRAAM has its own radar unit and flight control system. Before firing the missile, the F-15 computer transmits radar information specifying the intended target, and the missile's radar unit locks on. After the missile launches, its one goal is to steer itself (by adjusting flight fins) toward that target.

The Sparrow missile works on a similar principle, but it doesn't have its own radar transmitter. The pilot has to keep the plane's transmitter aimed at the target, to "paint" it for the missile.

The sidewinder missile uses an infrared sensor to pick up on an enemy plane's hot engine exhaust. The flight controls simply steer the missile toward the hottest area in sight.

The F-15 also has a built-in machine gun, an M-61 20-mm 6-barrel cannon, mounted inside the starboard (right) wing. The gun has an efficient Gatling gun design that can fire about 6,000 rounds per minute. It never gets the chance, however, because its magazine only holds 940 rounds. It can empty its entire magazine in less than 10 seconds!

The pilot selects a different targeting display on the HUD for each weapon. The machine gun display, for example, consists of a funnel shape. The pilot maneuvers the plane so that the target is in the center of the funnel and then opens fire.

The F-15 Strike Eagle has everything the F-15 Eagle has, and it can also carry just about any air-to-ground missile in the Air Force arsenal. It often carries guided munitions, such as the GBU-15 bomb. All in all, it can carry approximately 23,000 pounds (10,430 kg) of ordnance.

Both F-15 models also have a number of high-tech defenses. They have radar warning receivers, which detect enemy radar from ground stations, planes or guided missiles, and an advanced radar jammer to confuse these radar units. They also have a chaff dispenser, a device that shoots out a cloud of metal strips. Enemy radar picks up the chaff and temporarily loses its lock on the F-15.

The F-15's combination of high maneuverability, sophisticated electronics and powerful weaponry have made it a hugely successful weapon in the United States arsenal (and a number of other countries' arsenals, as well). But now it's approaching the end of its run. Boeing and Lockheed Martin have already developed its replacement, the F-22 Raptor.

The Raptor takes everything on the F-15 to a whole new level, with much greater acceleration, maneuverability and computer power. It's also designed for stealth flying, just like the F-117 and B-2 bomber.

For much more information about the F15, the F-22 and other military aircraft, check out the links below.