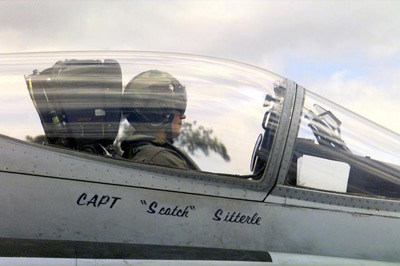 A Hornet pilot waits for take off.
Photo courtesy U.S. Department of Defense

In the late 1970's, Congress gave the Navy permission to develop a new kind of combat fighter that incorporated the latest technology available. To keep the budget in check, Congress set the limitation that the new craft had to be based on the design of either the F-16 or F-17.

The problem was that those craft were designed to take off from airstrips. A combat fighter designed for the Navy needs to be able to be deployed from aircraft carriers. To meet the challenge, several competing defense contractors had to team up to create this new craft.

In 1976 one design beat out all others and was officially designated the F/A-18. By 1983 the F/A-18 had been fully integrated into the Navy's air power.

Boeing, McDonnell Douglas Aerospace and Northrop Grumman worked together to create the Hornet's airframe (the body frame of the plane including the flight control surfaces, fuselage, wings and so on). General Electric (the company responsible for everything from light bulbs to dishwashers) designed the engines. Communications contractor Hughes provided the radar equipment.

The Hornet is the air strike workhorse for seven other countries besides the United States: