Now here's something you don't see every day: On Nov. 19, 2018, at Hill Air Force Base in Utah, dozens and dozens of F-35A Lightning II fighter jets took off in close formation, an exercise known as an "elephant walk." The drill was conducted by the active duty 388th Fighter Wing and Air Force Reserve 419th Fighter Wing, the Air Force's only combat-ready units to fly the long-awaited F-35A jets.

The taxiing and takeoff exercises, in which the jets deployed at 20- to 40-second intervals until they were all in the air at once, was followed by a flyby, intended as a show of force against enemies. At a cost of $90 million per plane, the total value of aircraft on the runway during the "elephant walk" was $3 billion.

According to the U.S. Air Force website, the exercise was intended to show the Air Force's ability to deploy a large force of jets against air and ground targets — basically demonstrate the readiness and capability of the F-35A. Launching fighter jets from multiple squadrons at the same time is challenging, and this kind of exercise allows the pilots and crew to assess their skills. The Air Force has staged previous elephant walks, but this was the first with the F-35A, which is a new addition to the fleet and is well-liked in part because its stealth technology makes it harder to be detected by radar.

"We are ready to fight tonight, and exercising with multiple squadrons of F-35s can demonstrate our ability to defeat potential adversaries wherever they may arise," Maj. Caleb Guthmann, 34th Fighter Squadron assistant director of operations and exercise project officer, said in a press statement.

The term elephant walk originated during World War II. Observers at the time commented that the taxiing aircraft — sometimes 1,000 or more at a time — resembled a herd of elephants on their way to a watering hole. Now, the term generally refers to sortie exercises, when a fleet of aircraft taxi, depart and land to test or demonstrate readiness for combat.

According to CNN, the Nov. 19 elephant walk comes on the heels of Defense Secretary James Mattis' October 2018 directive that by 2019, 80 percent of all U.S. military jets must be ready to deploy at any given time, including the F-35s. Incidentally, the first combat mission completed by F-35 jets was in Afghanistan just after Mattis's October directive.

It will take some work to achieve the numbers directed by the Defense Secretary. According to Popular Mechanics, older jets average about 40 to 50 percent ready to fly (able to launch immediately), and newer jets average 70 to 75 percent. The F-35, however, averages just 51 percent.

Lockheed Martin won the contract to build the F-35A, B and C about 17 years ago, and production has taken more time and money than originally projected. The program, when complete, is expected to cost $1.5 trillion and has been called "the most expensive weapons system in history." But, Lockheed has said that by 2020 it should be able to reduce the price to $80 million per jet.

Now That's Interesting
The F-35 is also known as the Lightning II and there are three main variations of the jet. The F-35A is the smallest, lightest, least expensive and most conventional. The Air Force currently has 156 F-35As. The F-35B, used by the Marine Corps, is designed for short landings and takeoffs, and there are currently 61 in service. The F-35C, of which the Navy has 28, is sturdier, has foldable wingtips, and is designed for carrier service. The F-35B and F35-C also have suffered from production issues and delays.

Humpback Whales Start Simpler Songs as Old Ones Get Too Complex 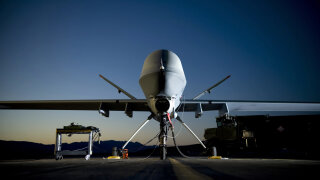 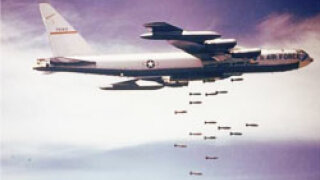 How the U.S. Air Force Works 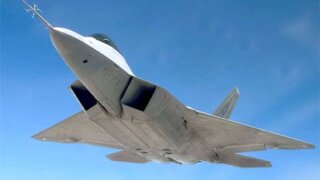