Could Someone Really Find a Mummy in Their Backyard? 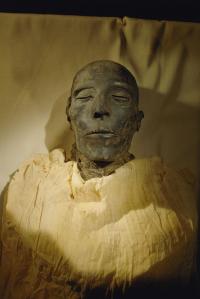 Is it possible to find a mummy in your backyard?
Kenneth Garret/National Geographic/Getty Images

In most environments, the first stages of decomposition begin within a few hours. In this initial stage, called autolysis, organs that contain digestive enzyme (the intestines, for example) begin to digest themselves.

­Autolysis is followed by putrefaction, the breakdown of organic matter by bacteria. In normal, temperate circumstances, putrefaction gets going about three days after death. Within a few months, the body is reduced to a skeleton. In hotter, more humid environments, this process is accelerated, because bacteria reproduce rapidly in such conditions. In colder, drier conditions, the process is slowed, because bacteria need heat and water to thrive (this is why we use refrigerators to preserve food). If the conditions are cold or dry enough, or if there isn't enough oxygen, the environment is so harsh that few bacteria can survive. In this case, the body will not fully decompose, possibly for thousands of years.

Could you really find a mummy in your backyard? Well, that all depends on where you live.

In nature, bodies have been preserved in the frozen ice of glaciers, the oxygen-depleted depths of peat bogs and the arid ground of the desert. The "Iceman" discovered in 1991 by tourists in the Italian Alps is one of the most amazing natural mummies. The 5,300-year-old corpse, found with perfectly preserved tools, died in a rocky hollow that quickly filled up with snow. Essentially, this created a natural freezer that preserved the body's tissues. This mummy has provided historians with a great deal of information about Europe's copper age, including representative technology, human health and tattooing practices.

For more information on mummies and information related to mummies, check out the links that follow.

One common question about mummies is how they got such a peculiar name. The term "mummy" was applied by early Arabic travellers visiting Egypt. When the outsiders saw some mummies that had been coated with black resin material, they assumed the Egyptian embalming process involved dipping the bodies in bitumen, a dark, sticky component of tar. Based on this misconception, they dubbed the preserved bodies "mummies," after mummiya, the Arabic word for bitumen.