The Kit of Parts 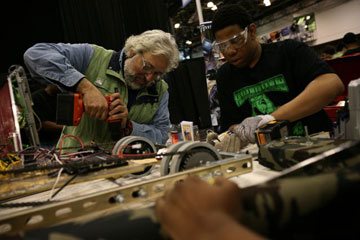 It takes a lot of work turn a kit of parts into a robot.
Image courtesy FIRST Robotics

Once you've formed your team, raised your funding and paid your registration fee, then it's on to the January kickoff meeting. Here, FIRST announces the challenge for the year, releases manuals and ships out the infamous kit of parts.

Each team gets the same kit, composed of the various technological bits and pieces that will become a team's robot: motors, sensors, shafts, bearings, a radio receiver, a battery power pack, a multichannel radio control system and various control system essentials.

Teams also are allowed to purchase certain approved extra items. With these parts, a team can begin the design process. Here, students have the chance to be as creative and innovative as possible, provided the robot contains three basic elements:

Let's explore that last requirement a tad closer. Some FIRST challenges require the robot to gather balls and move them toward the end of the field. How might a robot design handle this? It might throw the balls with arms, shoot them down conveyer belts or hit them with a paddle. As long as the robot has a means of carrying out required tasks, it's good to go.

Time flies in FIRST. As you might remember, teams typically have about six weeks to turn a kit of parts into a working robot. The American Society of Mechanical Engineers (ASME) publishes a very useful guide that recommends the following plan for the six-week construction cycle:

Weeks 3 and 4: Build the subsystems.

Week 5: Integrate the subsystems to build the robot.

Even assuming the team doesn't make a serious mistake, this is an extremely intense schedule. But it's also one of the things that makes FIRST such a challenging and rewarding experience.