Traumatic Removal of Tissue and Appendages 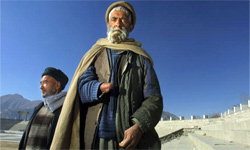 Abdul Jalil (forefront) stands inside Ghazi Stadium on Jan. 26, 2002, in Kabul, Afghanistan. Jalil lost his hand when the Taliban accused him of being a thief and cut it off as punishment.
Paula Bronstein/Getty Images

We've explored some of the atrocities committed by Nazi doctors, but we haven't examined one of their most gruesome efforts: transplanting limbs and tissue. Victims had their arms, legs and other body parts removed in horrifying fashion. Doctors then attempted to transplant these body parts to other victims, but the results were equally gruesome, leaving everyone involved disfigured and fighting for their lives.

Amputation and tissue removal have long been used as forms of torture. Torturers commonly remove fingernails, teeth and digits from victims, but any body part could be a target.

A traditional form of punishment, particularly under the Islamic law of Shariah, has involved removing the body part from a criminal that the person used to commit a crime. Throughout the Middle Ages, for instance, criminals in Britain would face amputation of hands, ears and other body parts by executioners, and the practice isn't by any means obsolete [source: Kellaway]. In 2007, for instance, an Iranian man had four of his fingers amputated after being convicted of multiple robberies [source: New Zealand Herald]. The physical pain and lifelong impairment such torture brings is only part of the punishment; such amputees can also become social pariahs because of their wounds.

The next entry on our list is torture in its most basic form.