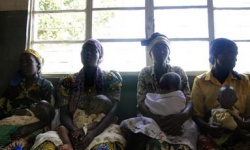 Rwandan women wait for medical treatment at a clinic in Kibuye in 2005. During the Rwandan genocide in the early 1990s, an estimated 25,000 women were tortured through rape.
Jose Cendon/AFP/Getty Images

Rape is a common form of torture, especially during wartime. Rape of men, women and children has occurred during conflicts across the globe. In the Balkan Wars of the 1990s, Muslim Bosnian women were subjected to systematic rape at the hands of Serb soldiers. In the Congo, from 2000 to 2006 alone, more than 40,000 women and children were raped [source: Booth]. In Rwanda in the early 1990s, an estimated 25,000 women were raped. Soldiers reportedly told their victims that they were "allowed to live so that they will die of sadness" [source: Booth].

Both men and women may suffer sexual assault. Whether the assaulter uses his or her body to inflict harm or brandishes a device to penetrate the victim's body, the act is constituted as rape. What's more, experts believe estimates of the number of men who've endured rape torture are low, as men may be more reluctant to report such episodes [source: Burnett and Peel].

While sexual assault is defined specifically, some experts assert that all torture is a form of rape because the victim's body is violated.