The Future for Hubble 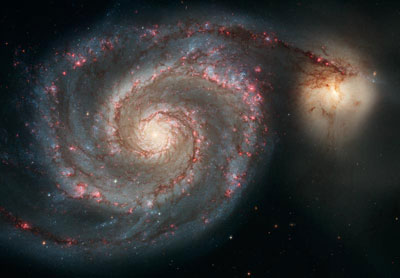 The exotic Whirlpool Galaxy, as seen through the Hubble telescope
Courtesy STScI and NASA

The 2009 repair mission will be the final Hubble upgrade and repair project. Once the crew of the Atlantis finishes working on the Hubble, the telescope will continue to collect data and transfer the information back down to NASA. With its new equipment, the Hubble will be able to look further into the universe and collect more information about celestial bodies.

The Hubble's upgrades will include a Wide Field Camera 3 (WFC3) and a Cosmic Origins Spectrograph (COS). The WFC3 can capture images using light across a wide spectrum, from infrared to ultraviolet. It will be the most powerful camera installed on the Hubble to date. The COS will gather data in a way similar to the STIS. So not only will NASA receive information from the Hubble's repaired systems, but also information from new, more powerful components.

Information from the Hubble can tell us a lot about the universe. Scientists plan to use the Hubble to continue research on everything from black holes to dark matter. With the Hubble, we might be able to detect more planets that are similar to our own. Without it, we'd have to wait several years before its replacement could take over the job.

But NASA is working on another space telescope. It's called the James Webb Space Telescope, developed by Northrop Grumman Space Technology. The new telescope will include multiple cameras that are more powerful than the ones currently on the Hubble.

The Hubble has provided invaluable information to scientists since its launch. Hopefully after this final repair mission, it will continue to do so for several more years.

To learn more about the Hubble Space Telescope and other subjects, take a closer look at the links below.

The Space Telescope Science Institute (STScI) withholds all images taken by the Hubble from the public for a full year before releasing them. Why is that? It's to give the various research institutions and universities the time they need to analyze and document their investigations. These organizations have to schedule time with the Hubble well in advance. If the STScI were to release photos earlier, these institutions would have to compete against other groups that didn't schedule time with the Hubble. It all comes down to fairness.