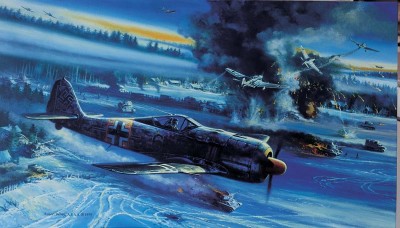 Like the American P-38, Germany's Focke Wulf Fw 190 lent itself to multiple uses, and existed in a myriad of variants. It was, for example, a capable tank-buster that could carry air-to-ground missiles or rockets. See more classic airplane pictures.
m

Flying fewer than five months after the P-38, on June 1, 1939, the beautiful Focke Wulf Fw 190 was one of the best fighters of World War II. Designer Professor Kurt W. Tank and his team were aided by Flugkapitan Hans Sanders, a brilliant test pilot who would make the first flight of every variant of the "Würger" (Butcherbird).

Tank had worked with Willy Messerschmitt earlier in his career, and his fighter would come to be the greatest rival to the Messerschmitt Bf 109 within the Luftwaffe. Tank placed tremendous emphasis on clean lines, low structural weight, ease of manufacture and maintenance, and structural integrity.

As with the Sopwith Camel of World War I, an effort was made to concentrate the maximum amount of weight as close to the center of gravity as possible, to improve maneuverability. Two design elements of the Würger stood out immediately in comparison to the Messerschmitt Bf 109. The first was its use

of a cleanly cowled radial engine. The second was its wide-track landing gear that conferred excellent takeoff and landing characteristics, an area in which the Bf 109 was notoriously deficient.

The Focke Wulf Fw 190 was fast and maneuverable from the start, and packed a heavy armament package, consisting usually of four machine guns and two cannons. Provision was made for carrying a bomb or a drop-tank under the fuselage centerline.

Small yet ferociously powered, the Focke Wulfe Fw 190 was one of the finest aircraft to see service during World War II. It was structurally sound, with a cockpit positioned for an ideal center of gravity. The landing gear's wide track contributed to ease of takeoff and landing.

Read more about the Focke Wulf Fw 190, and find specifications for this classic airplane, in the next section.

Kurt Tank had a hand in numerous designs that proliferated at Focke Wulf during the war, including the less-than-successful reply to Britain's de Havilland Mosquito, the Focke Wulf Fw Ta-154.

The advent of the jet engine spurred new ideas, one of which, the Ta 183 "Huckbeun" (Lame Jack) was closely studied in the Soviet Union, and may very well have been the inspiration for the MiG-15 fighter. When Tank went to Argentina at the end of the war, he created the Pulqui II, which was clearly a development of the Ta-183.

Tank next went to India, where he designed the Hindustani Aeronautics Limited (HAL) fighter, the supersonic HAL HF-24 Marut. Ultimately, 125 of these advanced jets were delivered and they acquitted themselves well in India's 1971 war with Pakistan.

The veteran designer returned to Germany as a consultant to MBB, but he became ill and passed away on June 5, 1983, after having lived a life filled with magnificent triumphs and bitter disappointments.