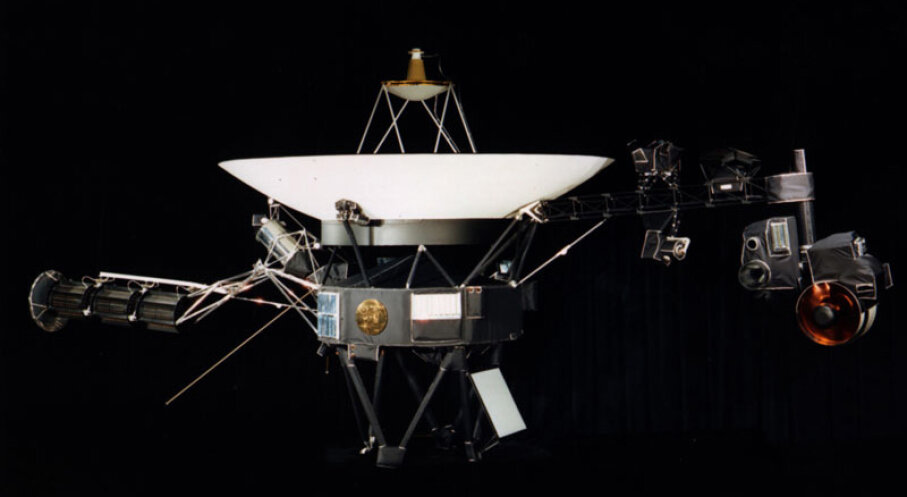 For spacecraft built on 1970s technology and exposed to the demands of space, Voyager 1 and 2 have held up impressively. NASA/JPL

On Sept. 5, 1977, NASA's historic Voyager 1 mission launched, joining its identical robotic twin, Voyager 2, on what would turn out to be a 40-year odyssey through the solar system and into interstellar space. Voyager 2 had launched more than two weeks earlier on Aug. 20, 1977, and both spacecraft completed the dazzling "Grand Tour" of the outer solar system's planets.

Voyager 1 has now left our sun's heliosphere, becoming a bona fide interstellar probe and the most distant human-made vehicle, and Voyager 2 is about to flirt with the outermost boundary of the heliosphere, the heliopause. But exploring interstellar space wasn't a mission objective back in 1977. Back then the twin probes' aim was to reveal the rich diversity and mystery of the outer solar system's planets.

"For me, the highlights of Voyager were clearly the planetary encounters," recalled Ed Stone, Voyager project scientist, in a series of personal mission stories published by NASA's Jet Propulsion Laboratory.

"All six of them were wonderful experiences where every day we saw and learned new things. We had a lifetime of discovery packed into each one," Stone continued.

So Many Planetary Discoveries

For Stone, who has been project scientist for the Voyagers since 1972, his favorite memory was the jaw-dropping discovery of volcanoes on Jupiter's moon Io in 1979: "The eruptions on Io were the first direct evidence of active volcanoes elsewhere in the solar system ... This astonishing discovery clearly signaled that we could expect many more surprises," he recounted.

And he wasn't wrong. Both Voyager 1 and 2 changed our perspective of our solar system, revealing never-before-seen details in planetary atmospheres and revealing new discoveries about interplanetary space. New insights to Saturn's beautiful rings were gleaned, and a huge diversity of moons swarming around the gas giants was revealed.

These trailblazers helped lay the groundwork for future missions to the outer solar system, such as the NASA/ESA Cassini-Huygens mission, NASA's Galileo and New Horizons, but there are few more visceral science impacts on society than when, in 1990, Voyager 1 was commanded to turn around and capture an image of Earth, from nearly 4 billion miles (6.4 billion kilometers) distant, at the request of superstar astronomer and science communicator Carl Sagan.

When reflecting on the photograph during a speech at Cornell University on Oct. 13, 1994, Sagan used the image of the pale blue dot "on a mote of dust, suspended in a sunbeam" to explain the deeper meaning behind the reason for capturing it.

"To my mind, there is perhaps no better demonstration of the folly of human conceits than this distant image of our tiny world," he said. "To me, it underscores our responsibility to deal more kindly and compassionately with one another and to preserve and cherish that pale blue dot, the only home we've ever known."

Powered by the radioactive decay of plutonium-238 pellets housed inside its radioisotope thermoelectric generator (RTG), Voyager 1 and 2 are still operational, albeit on a dwindling electricity supply. RTGs are used for deep space missions where the light from our sun is too weak for solar arrays to be practical. But RTGs don't last forever.

In an interview with Space.com, Stone estimated that both spacecraft only have about 10 years' supply of power before the plutonium heat output dwindles to levels that won't sustain any spacecraft instrumentation or critical subsystems. Though the Voyagers will eventually die, they continue to take data, and Voyager 1 is taking measurements of a very alien region – the interstellar medium.

On Aug. 25, 2012, NASA confirmed that Voyager 1 had officially left the heliosphere, speeding into interstellar space (Voyager 2 is traveling in a different direction and hasn't encountered interstellar space, yet). The mysterious outermost regions of the solar system have now been probed, and Voyager 1 was able to take measurements of the magnetic field and particle energies – important measurements that have allowed scientists a very privileged view of how our sun's magnetic field and solar wind particles interact with the space between the stars.

It took nearly four decades to reach the interstellar shores – a fact that underlines the multigenerational effort the Voyager program has become.

"I will never forget my first day on the job – walking into a room full of world-class scientists engaged in lively discussion about humankind's first in-situ measurements of interstellar space," remembered Caltech graduate student Jamie S. Rankin in her personal mission story. Rankin joined the Voyager team only six days after Voyager 1 entered interstellar space: "Indeed, it was a historical moment, and there I was, a kid in her early 20s wearing sandals, shorts, and a comical t-shirt with a black-hole Pac-Man eating a bunch of planets."

Rankin – who's adviser is Stone – is using Voyager data to explain "how the intensities of galactic cosmic rays change through their interactions with the heliosphere," she said.

So, after four decades of exploration, two spacecraft built from 1970s technology are still exploring, and a new generation of scientists are using them to carry out cutting-edge research in a region of space that no other robot that we know of has ever experienced.

Even after their power supplies dwindle and the Voyagers lose communication with Earth, they will be silent interstellar emissaries for humanity, carrying the Golden Records as shrines of the civilization that built these incredible machines, should an extraterrestrial intelligence stumble upon them in the eons to come.