Good News, Mars Colonists: Pure Water Ice You Can Dig Up With a Shovel

by Ian O'Neill, Ph.D. Jan 15, 2018
Researchers have discovered that some deposits of Martian water ice are more than 100 meters (328 feet) thick. All that nearly pure water ice could be hugely helpful to future Mars colonists. Pictured is a cross-section of one of the vast deposits of underground Martian ice. NASA/JPL-Caltech/UA/USGS

Mars has large deposits of near-pure water ice just beneath the surface at mid-latitudes, a discovery that could have huge implications for future human settlement of the red planet.

"Astronauts could essentially just go there with a bucket and a shovel and get all the water they need," said Shane Byrne in a release from NASA's Jet Propulsion Laboratory. Byrne, who works at the University of Arizona Lunar and Planetary Laboratory in Tucson, co-authored a new study using the suite of instruments and cameras on NASA's Mars Reconnaissance Orbiter (MRO) to uncover the icy find.

Buried just a few meters under the ground and covered by fused rock and dust, these layers of ice were discovered at eight sites in eroded scarps, or steep hillsides. The most exciting thing about these sites is they are in regions that could be accessible to future Mars explorers — at 55 to 58 degrees latitude in the northern and southern hemisphere — negating the need for traveling to challenging polar latitudes to access a frozen water supply.

These ice deposits come from layers of ancient snow that became buried under rock and more ice. Over time, these deposits have become exposed as the scarps eroded. But how did layers of snow become deposited at such low latitudes in the first place?

Although Mars currently exhibits ice and snow on the surface only at high latitudes, this wasn't always the case. Mars experiences shifts in its climate over the eons as its axis of rotation changes. Its axial tilt currently approximates that of Earth's, but over the course of hundreds of thousands and even millions of years, Mars' tilt has varied dramatically, driving global climatic shifts. Scientists can therefore use the information recorded in these scarps as an ancient geological record of how Mars' climate has evolved.

"If you had a mission at one of these sites, sampling the layers going down the scarp, you could get a detailed climate history of Mars," said Leslie Tamppari, MRO deputy project scientist at NASA's Jet Propulsion Laboratory. "It's part of the whole story of what happens to water on Mars over time: Where does it go? When does ice accumulate? When does it recede?"

The study, which has been published in the journal Science, is a real help to future human Mars mission planners. To set up a viable human presence on the Martian surface, astronauts will need to harness in-situ resources. They can't bring all the water, fuel and building supplies with them from Earth, but rather will need to use whatever resources Mars can provide. Tapping into a plentiful supply of near-pure water ice will be critical for providing drinking water and a fuel resource, not to mention irrigation for crops.

Previously, scientists have confirmed large deposits of subsurface water ice using ground-penetrating radar, but information about what the ice is mixed with and the quantity of water had been difficult to decipher. Now, by studying these scarps, scientists have found that these deposits are close to being pure water ice. And, through observations by orbiting spacecraft, we know where to send our astronauts to dig for water.

Can Different Bird Species 'Talk' with Each Other?

Doctors Provide Yet Another Reason to Never Hold in a Sneeze 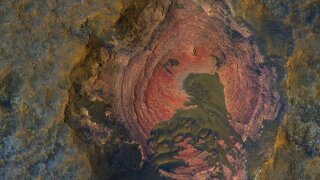 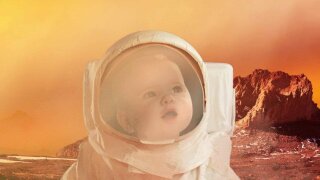 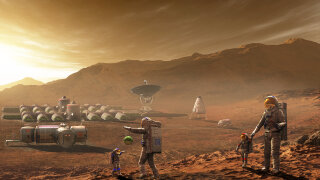