Gravitational Waves Detected Again, But This Is the Best Yet

Browse the article Gravitational Waves Detected Again, But This Is the Best Yet 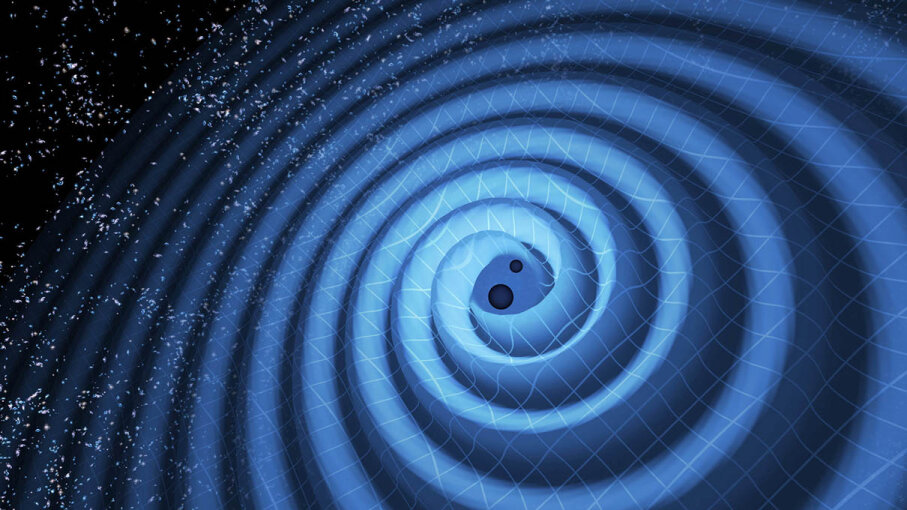 Two black holes spiral toward each other and send gravitational waves rippling outward that eventually can be detected on Earth. LIGO/T. Pyle

The era of gravitational wave astronomy has truly begun.

On Aug. 14, ripples in space-time washed through our planet. These gravitational waves had traveled 1.8 billion light-years to reach us and, like the three confirmed detections that came before it, this signal – called GW170814 – was caused by two stellar black holes colliding and merging as one.

Physicists interpreting the gravitational wave signal say that GW170814 was caused by two black holes weighing in at 31 and 25 times the mass of our sun getting locked in a gravitational dance, colliding and combining into one. The merger created one black hole 53 times the mass of our sun. The remaining mass, around three solar masses, was converted into pure energy, blasting gravitational waves in all directions. Scientists published a paper announcing the discovery in the journal Physical Review Letters.

The previous detections were solely made by Advanced LIGO (Laser Interferometer Gravitational-wave Observatory), which has two identical observing stations located in Washington and Louisiana. This time, however, GW170814 was picked up by a third detector called Advanced Virgo, located near Pisa, Italy. That's the first time that's happened. Like LIGO, Virgo uses an ultra-precise laser interferometer to detect the vanishingly small warps in space-time as gravitational waves travel through our volume of space at the speed of light.

"This is just the beginning of observations with the network enabled by Virgo and LIGO working together," said David Shoemaker of the Massachusetts Institute of Technology (MIT) and LIGO Scientific Collaboration (LSC) spokesperson in a statement. "With the next observing run planned for Fall 2018 we can expect such detections weekly or even more often."

A map of all the gravitational wave detections so far are illustrated here – note that the area of the probable source of GW170814 (lower left) is much smaller than all the others.
LIGO/Virgo/Caltech/MIT/Leo Singer (Milky Way image: Axel Mellinger)

Moving from a two-detector network to a three-detector network shrinks the source's volume of space by a factor of 20 and the region of sky for where GW170814 likely originates is 10 times smaller than previous detections. Scientists also gain a better measurement of distance when more detectors are added to the network.

"This increased precision will allow the entire astrophysical community to eventually make even more exciting discoveries," said Laura Cadonati, who works at Georgia Tech and is the deputy spokesperson of the LSC, in a statement. "A smaller search area enables follow-up observations with telescopes and satellites for cosmic events that produce gravitational waves and emissions of light, such as the collision of neutron stars."

So far, only the gravitational waves from black hole mergers have been detected, but as the sensitivity of laser interferometers increases, scientists hope to detect collisions between neutron stars, for example. As more detectors are added, the exact positions of these energetic events may be pinpointed, allowing other observatories that see the universe in the electromagnetic spectrum (i.e., light) to carry out follow-up observations. These studies could research events like supernovae in incredible detail.

When multiple observatories looking at different wavelengths of light study the same phenomena, groundbreaking discoveries can be made. But when gravitational wave observatories are added to the mix, who knows what incredible science the cosmos will reveal.

"With this first joint detection by the Advanced LIGO and Virgo detectors, we have taken one step further into the gravitational-wave cosmos," said David H. Reitze, who works at the California Institute of Technology (Caltech) and is executive director of the LIGO Laboratory, in a statement. "Virgo brings a powerful new capability to detect and better locate gravitational-wave sources, one that will undoubtedly lead to exciting and unanticipated results in the future."

Now That's Crazy
The Virgo detector has two arms that stretch 3 kilometers (1.8 miles) long. When a gravitational wave passes through those arms, they stretch by just a billionth of a billionth of a meter.