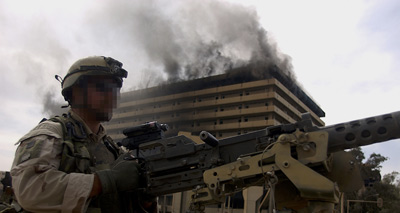 Some of the most important operations of the Green Berets take place during wartime. There are two kinds of wartime tactics: conventional and unconventional, and a war may often see both kinds. Conventional warfare includes military operations on a massive scale. It uses tanks, planes, ships and large troop forces. Think of conventional warfare as a sledgehammer -- it can have a profound effect when it hits, but is heavy and unwieldy.

Unconventional warfare is more like an exacting scalpel. It includes guerrilla warfare -- battles that aren't staged and are usually a surprise -- insurgencies or uprisings, precise fast-strikes and other small-scale tactics that can have a big effect. The Green Berets' operations fall well within the category of unconventional warfare.

Imagine that a country at war is a large cell. The front -- the dividing line between opposing militaries -- is the cell wall. While battles and skirmishes may weaken and change the cell wall, it's generally fortified. Conventional tactics can only go so far at diminishing its strength. The best way to break a cell wall is from both without and within.

The role of the Green Berets during wartime is to penetrate this cell and create insurgencies from within enemy territory.This is highly dangerous work: Green Berets are often asked to operate on their own, for long periods of time. They live as the locals do, interacting with them to gain information and their trust. Green Berets live by their wits, making their own decisions with little, if any, interference or help from their superiors.

To be successful, a Green Beret must often work out of uniform, leaving him vulnerable and outside the jurisdiction of the Geneva Convention. Under the Geneva Convention -- a global treaty defining the roles of a combatant during war and outlining the rights given to him -- any soldier caught out of uniform is not subject to protection by the Convention. This means he may be tortured or killed on sight if found by enemy combatants, which makes his job even more dangerous.

Once inside enemy territory, Green Berets identify disaffected groups, those people who are not happy with the current power structure or living conditions. These may be native tribes or communities who have been mistreated by the current power, minority populations or the former power structure itself. Green Berets consolidate these people -- often from widely diverse backgrounds -- into a fighting force of guerrilla armies. This is called multiplying forces (expanding the number of troops fighting along with the United States against another military by recruiting native peoples), and the Green Berets are good at it. During the Vietnam War, for example, a handful of Green Berets managed to aggregate a variety of indigenous tribes into a 60,000-member guerrilla army, the Civil Irregular Defense Force.

The guerrilla armies that the Green Berets amass behind enemy lines are trained, equipped and led by the Special Forces. Green Berets are also valuable at collecting intelligence on the enemy, as well as spreading disinformation, and even directly affecting the information capabilities of the opposing military through strikes on communications infrastructure.

Due to their stealth and ability to vanish suddenly, Green Berets serve as valuable assets for locating targets for the conventional military. In Afghanistan, for example, Green Berets selected and acquired the targets that would have the most impact for United States missiles.

But the Green Berets can also be diplomats. In the next section, we'll learn about the roles they play in the local and national politics of foreign nations.