Future of the Green Berets 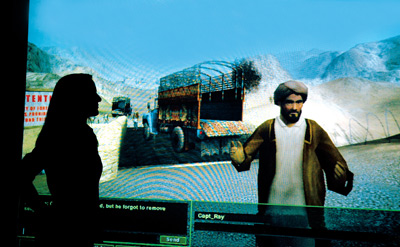 The U.S. Army and Sandia have created a simulation to help train Green Berets in the art of adaptive reasoning.
Photo courtesy Sandia

With the United States fighting insurgencies, militias and terrorist groups, the wars in Iraq and Afghanistan have shown that the future of warfare lies largely in unconventional tactics. Because of this, the need for special operations forces like the Green Berets is also increased.

The difficulty that has always faced the Green Berets is that they are so specialized; their ranks are not easily enlarged. While the military continues to refine and expand the arsenal available to it, the Green Beret's tenet that "humans are more important than hardware" remains constant. To help increase the number of special operations forces without diluting the pool of talent in the Green Berets, the United States Marine Corps has created its own special forces branch in 2007, the Marine Special Operations School.

Having a variety of different types of unconventional operations groups should mean that the chances the United States will have a tool for every job is increased. To some, however, the proliferation of other branches of special operations forces will only reduce the amount of funding available to established groups like the Green Berets.

One sign that shows the commitment of the United States to the Special Forces ideal is the new avenues being conducted for their special training. In one instance, the Army has joined forces with government software producer, Sandia, to create a new simulation that helps the Green Berets focus their ability to remain mentally agile as well as culturally sensitive. Called Adaptive Thinking and Leadership (ATL), this simulation advances and reinforces the training that Army Special Forces troops receive at the John F. Kennedy Special Warfare Center and School at Ft. Bragg, N.C.

Department of Defense reports suggest that all special forces will become more integrated, at least operationally, as Joint Special Operations Command (JSOC) -- the military organization represented by commanders of all branches, which create and carry out special operations missions with members of different branches working together -- continues to integrate the special forces from the different branches.

It's difficult to imagine, however, the Green Berets will ever become deactivated. This is especially true given the public image of the Green Berets. Ever since the group's exploits in the Vietnam War were publicized in the United States, the American public's imagination has been captured by the Green Berets. Then there's the level of secrecy surrounding the Green Berets' operations. While some regard the secrecy as necessary, others question whether it encourages unethical actions on the part of the U.S. military.

The military appears to be aware of the Green Berets' intrigue. To this end, "America's Army: Special Forces," a recent video game created by the United States Department of Defense, has been released and is available free to the public. Moreover, National Geographic claims to have gained "unprecedented access" to the Green Berets in its film "Inside the Green Berets."

For lots more information on the Green Berets, including related articles, and a link to download "America's Army: Special Forces," check out the next page.