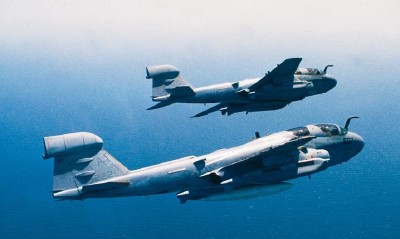 The Grumman EA-6B Prowler came from the Grumman "Iron Works" on Long Island, New York. This company was justly famed for its long procession of superb fighters, from the first, the XFF-1, to the latest modification of the F-14 Tomcat. Less well known, but equally important, was the long series of multipurpose combat aircraft that began with the TBF Avenger and extends down to the apparently irreplaceable EA-6B Prowler.

The Grum­man EA-6B Prowler is a perfect symbol of the Jet Age's remarkable syntheses of engines, airframes, and electronics. Whereas in the past new engines were developed for new airframes, and vice versa, the continual introduction of more capable electronics has changed the process.

Because the new electronic systems -- whether navigation, reconnaissance, electronic countermeasures, bombing, or anything else -- are not only more effective, but generally smaller in size and weight than their predecessors, they have had the effect of extending the service life of military aircraft. In cruelest terms, electronics have turned airframes into mere platforms, in which improvements in performance are sought primarily through the improvements in the avionic equipment.

Thus it is that three of the United States' military services -- Navy, Marines, and Air Force -- now depend upon the Grumman EA-6B Prowler, an aircraft that resulted from a design competition held in 1957.

Developed from the Grumman A-6 Intruder, which made its first flight on April 19, 1960, the Grumman EA-6B Prowler's array of external stores and bulging antennas give it an awkward look that simultaneously reveals its heritage and belies its capabilities.

The Intruder had served brilliantly as an attack bomber, carrying a huge ordnance load into combat in Vietnam. As the KA-6D, it performed well as a tanker, and as the EA-6A it conducted reconnaissance and electronic warfare missions. A much more sophisticated version of the Intruder, the A-6E, first flew on March 22, 1974. It was so versatile that it bore the brunt of the Navy and Marine attack missions until the arrival of the Boeing F/A-18 Hornet.

Fewer than 1,000 of the original Intruders were manufactured, and these were continuously modified to take advantage of developments in electronic systems. The Intruder's forte was its capability to navigate at low level, in weather, to a distant target, execute a strike and withdraw, again hugging the terrain all the way home. Despite being more than 20 years old, the Intruder performed well in the Persian Gulf War.

Move on to the next section to check out specifications for the Grumman EA-6B Prowler.

The Grumman EA-6B Prowler performed very well during the Persian Gulf War, where the U.N. coalition forces achieved a victory so one-sided that it had a major effect on the collapse of the Soviet Union and the end of the Cold War.

However, victory in the Cold War meant a drastic, 40-percent slash in the funding of the U.S. armed services, which were required to cut back on units, equipment, modernization, training, and spare parts.

The Air Force retired its General Dynamics/Grumman EF-111 Raven, and is now forced to rely on the Navy's Prowler for ECM coverage. The current shortage of Prowlers resulted in the loss of a Lockheed F-117A Stealth fighter during the war in Bosnia. Because ECM coverage was inadequate, the Serbs were able to detect and shoot down the F-117A. In doing so, they exposed the false economy of years of excessive cuts in military spending.

The success of the Grumman A-6 Intruder led to orders for 180 Grumman EA-6B Prowlers, which were intended from the outset to conduct electronic countermeasures. The distinguishing feature of the Prowler was a fuselage lengthened by five feet so that four crewmembers -- a pilot and three electronic countermeasure operators (ECMS) -- could be accommodated. Weight was increased by about 2,000 pounds, and the engines were uprated from 9,300 pounds static thrust to 11,200 pounds.

The Grumman EA-6B Prowler can conduct a wide variety of missions. The simplest of these is the gathering of signal intelligence by using its equipment passively to determine the nature of hostile electronic systems. The most essential mission of the Prowler is the active electronic countermeasure escort of strike forces.

The Prowlers accompany the strike aircraft to the target area, where they jam enemy radar sites with signals transmitted from pod-mounted emitters. Alternatively, the Prowlers cover a multiple-strike mission by orbiting at a distance from the target area and masking the approach of a strike force by jamming enemy radars.

The versatility of the Grumman EA-6B Prowler was significantly increased when it was armed with AGM-88A HARM missiles, which it can use to destroy enemy radars. Armed EA-6Bs can be used to fly in advance of the main strike force, and engage in SEAD (suppression of enemy air defenses).

The dangerous nature of its mission has caused attrition in the EA-6B fleet, at a time when its capabilities are even more in demand. The Prowlers and their crews will rise to the challenge, however, as they have always done in the past.