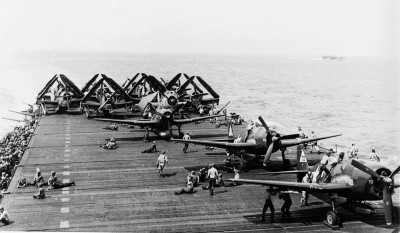 The valiant Grumman Wildcat's fight against the Japanese Zero was soon overshadowed by the magnificent performance of the Grumman F6F Hellcat, which would account for 4,497 of the 6,477 shoot-downs achieved by American carrier pilots during World War II. Examples in service with the Marines and the Fleet Air Arm downed another 1,053 enemy planes. Overall, the Hellcat ran up a 19-to-1 victory ratio.

Pilot Bob Hall made the first flight of the Grumman F6F Hellcat on June 26, 1942, and there followed a production stream of no less than 12,275 F6Fs in just 30 months from the Bethpage, Long Island, factory.

The Grumman F6F Hellcat proved to be the supreme compromise in aircraft, not being the fastest, the most maneuverable, the most pro­duced, the most heavily armed, or perhaps even the most beautiful. Instead, it had exactly the right combination of those ingredients, and established an ascendancy over its Japanese counterparts that was never challenged.

The Grumman F6F Hellcat resembled the Wildcat in that it was an all-metal monoplane powered by a radial engine, but it had significant improvements. The wing was lowered to a "mid-low" position, shortening the length of the landing gear to ease deck-landing stress, and widening the track for improved deck handling. The huge, almost square wing had lots of lift and was strong as a bridge. If the Hellcat had a deficiency, it was rearward visibility, for the cockpit was faired into the fuselage, just as on the early Republic P-47s.

The Grumman F6F Hellcat had many virtues and two great assets: its strong, reliable Pratt & Whitney R-2800 engine, and the increasing skill and training of its pilots. By 1944, the blue Hellcats ranged over the Pacific, trouncing Japanese land-based airpower and providing comprehensive close-air support in what became known as "The Big Blue Blanket" of airpower.