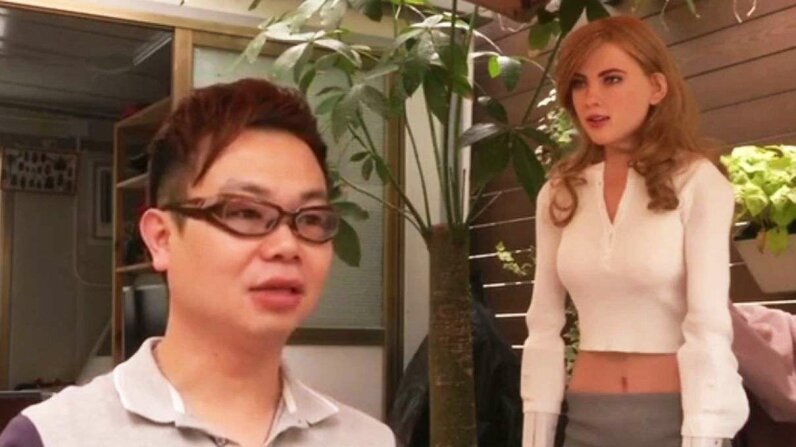 In the 2013 film "Her," director Spike Jonze imagines a not-so-distant future in which a lonely fella shacks up with a sentient computer operating system named Samantha. The lonely guy was portrayed by actor Joaquin Phoenix, the AI voiced by actor Scarlett Johansson. For one Hong Kong tech geek, it appears the future is now: He's created at home a life-sized robot that can talk and move. It also just so happens to look at lot like a certain sultry-voiced movie star.

Ricky Ma won't say who he modeled his Mark 1 robot on, but one look at the prototype is sorta like running into a wax replica of Johansson at Madame Tussaud's. There's the dirty blonde hair, the hazel green eyes, and even a perfectly placed mole on the robot's cheek. Mark 1 is programmed to make simple movements when prompted by voice command, and responds to a predetermined set of questions. Tell the robot how beautiful it is and it — she? — will even throw you a wink and a smile. (No word on what happens if you compliment its acting ability or professional accomplishments.)

Ma says he built RoboScarJo with about $50,000, some hard work and a whole lot of fits and starts. That includes studying robotics and mastering 3-D printing, all of which Ma reportedly did from the comfort of his own backyard.

What he doesn't say is why he's being so coy about the inspiration behind robot. Maybe that's because it's a little creepy to have a life-sized robot version of your favorite actress. Or maybe it's just that Ma would likely face some pretty hefty legal bills if he tried to make money off of a celebrity's likeness. What does it mean for individual rights when someone can literally objectify someone? Just because an actor is a public figure, does that mean her figure's public?

Now That's Interesting
Eric Robot, an electric-powered aluminum bot controlled by a remote wire and unveiled at an engineering exhibition in 1928, is one of the first known humanoid robots.