Hottest Gas Giant Ever Discovered May Be Evaporating to Death 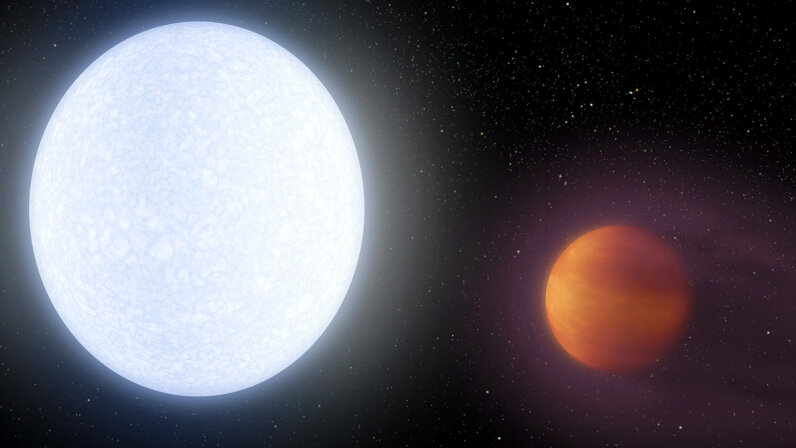 It's literally one of the hottest astronomical discoveries to date! Scientists have identified a giant exoplanet with temperatures reaching 7,800 degrees Fahrenheit (4,315 Celsius), the hottest gas giant planet ever identified. Learning more about it, researchers say, could help humanity unravel the mystery of planetary death.

An international research team led by astronomers at Ohio State and Vanderbilt universities discovered the superheated planet, known as KELT-9b, and published the results of their findings in the journal Nature. The Jupiter-esque gas giant circles around a host, a blue A-type star called KELT-9 that is nearly twice as hot as our sun and nearly three times as big. KELT-9 radiates such intense ultraviolet heat that KELT-9b, trapped in a close orbit, is doomed. As the planet whirs around its host star every 1.5 days, it may be evaporating with every orbit.

KELT-9b, the superheated exoplanet, was discovered with a Kilodegree Extremely Little Telescope (KELT). The low-resolution device offers sweeping views of the sky, and costs only about $75,000. Traditional astronomical telescopes range into the millions of dollars.
KELT Collaboration

But just how the planet will meet its ultimate end remains to be seen.

Scientists are exploring several theories that outline KELT-9's demise. The planet is a gas giant 2.8 times larger than Jupiter but only half as dense. That's because it has "puffed up like a balloon," says NASA, due to the extreme radiation from its host star. It's so superheated that the molecules for planetary survival — water, for instance — can't form, and KELT-9b may continue to wither away. It has a comet-like tail streaming away from its star, perhaps already signaling impending disintegration.

"Or, if gas giant planets like KELT-9b possess solid rocky cores as some theories suggest, the planet may be boiled down to a barren rock, like Mercury," said Keivan Stassun, the Vanderbilt astrophysicist who co-directed the study, in a statement.

And though the planet is hotter than many existing stars, it could also get swallowed up by its host star before it fades away. That's because KELT-9 is swelling on its way to becoming a red giant — one of the phases of a dying star — in about a billion years.

In whatever manner the planet's end comes, studying KELT-9b adds to researchers' collective understanding. "As we seek to develop a complete picture of the variety of other worlds out there, it's important to know not only how planets form and evolve," said Stassun, "but also when and under what conditions they are destroyed."

This animation shows how the exoplanet KELT-9b is losing part of its substance due to intense radiation from its star.
NASA/JPL-Caltech
Now That's Interesting
The exoplanet KELT-9b is also unusual because it orbits perpendicular to the spin axis of its home star KELT-9. That would be like a planet in our solar system orbiting perpendicular to the plane in which all the other planetary orbits (generally) exist.